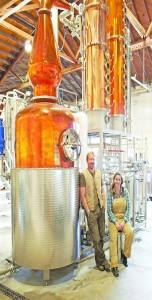 by Emily Enger
In today’s culture, telling people you are a distillery owner is still the rarest answer at the party. While craft distilleries are starting to increase in number, mainstream America is still a bit in awe of the profession. Thankfully, anomalous jobs have never bothered Timo and Ashby Marshall. After all, the husband and wife team met while working as deck hands on an ice breaker ship in Europe. By comparison, being a distillery owner is downright common!
When the couple decided to open Spirit Works Distillery, it began with yet another rare item: sloe gin. The British liquor — or rather, liqueur — could not be found in its traditional form anywhere in the U.S. Timo, originally from Devon County in the United Kingdom, had an obvious vested interest in creating his native gin. He and Ashby intended to find an existing distillery that would let them create the sloe gin. But as they toured pre-established facilities to hook up with, their environmentalism met their artisanal sense. Soon they found partners willing to back their dream for a grain-to-glass facility, and Spirit Works Distillery was born in Sebastopol, CA.
Aging Gin in a Barrel?
As a small craft gin house, one of the first things the Marshalls needed to do was product development. “We experimented and made a lot of very good, very different gins,” said Timo. “But then we had to store that gin somewhere.”
Regulations limit the amount of product small distilleries can store on site, so the Marshalls had to come up with a way hold everything while still perfecting their recipe. What happened was something Timo calls coincidental and serendipitous.
“There are two exceptions to the regulations,” explained Timo. “One is if you store your stuff in bottles. The other is if you store it in barrels.” They chose to barrel their gin, as if they were aging whiskey. “It became the beginning of an experiment for us and we found really interesting results.”
As they left the gin to age in different types of wooden barrels, they slowly tasted each one. “It was really fascinating for us,” said Timo. “There was an aspect of the botanicals that softened with some barrels. In other barrels, the botanicals came to the forefront. And we hit a couple barrels that were really just exceptional. We wanted to see if it was commercially viable, so we replicated our favorite one.”
They age the unique liquor in barrels made of Quercus alba, or white American oak. The result? “It’s like the marriage of gin and whiskey,” said Timo. “You get the botanicals of a beautiful, perfected gin and the smokey, vanilla notes of wood from the barrel.”
Aging gin in a barrel comes with its unique challenges. It’s aged only for a matter of months, and needs to be checked often, as over-aging can be a problem. “The moment it’s been in the barrel too long, you don’t taste the gin any more, you just taste the wooden barrel,” Timo said.
And the barrels aren’t easy to come by. Spirit Works currently uses fresh barrels, but plans to experiment with used ones. Plus, the added monitoring, as well as limited availability, means prices for Barrel Gin have to be higher. “On the shelf, our normal gin sells for about $30-35,” said Timo. “Our Barrel Gin is $50-55.”
The bulk of gin at Spirit Works is made using more standard methods, though their Barrel Gin has now become a full product line. “But the Barrel Gin is still pretty limited,” said Timo. “We do it by supply and demand, on a time scale as opposed to a production scale.”
Serenaded Whiskey
Gin isn’t the only item that gets a unique experiment at Spirit Works. Their whiskey, also aged in traditional barrels, got a recent spin as well.
“The aging process in a barrel is all about the interaction of the liquids with the woods,” explained Timo. “That interaction happens different ways.”
One aging theory is that micro vibrations help the maturation process. To achieve this, some distillers attach hoses to the outside of barrels and pulse air through. Ashby and Timo were considering the vibration theory one day, and decided to give it a try…but with music instead of air. Timo had an old cell phone that he stripped of data. He uploaded albums of The Devil Makes Three, a favorite bluegrass band of his, then set the playlist to random and attached headphones to one of their barrels.
Since that first music barrel, they’ve added a couple more. Different musical genres vibrate at different rates, so they have added the soundtrack to the Nutcracker ballet to another barrel. A couple employees have put together iPods of their favorite bands, as well.
Did it make a difference? “We’ll see,” said Timo. “This is a fairly new idea we did for fun. It’ll be another year and a half to two years before that whiskey has finished aging.”
Regardless of how the serenaded whiskey turns out, it’s a win-win for Spirit Works Distillery. Whether it improves the batch or makes little difference, their whiskey will come with a great story of yet another time the Marshalls chose to do something just a little out of the ordinary. 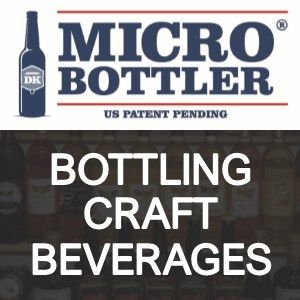 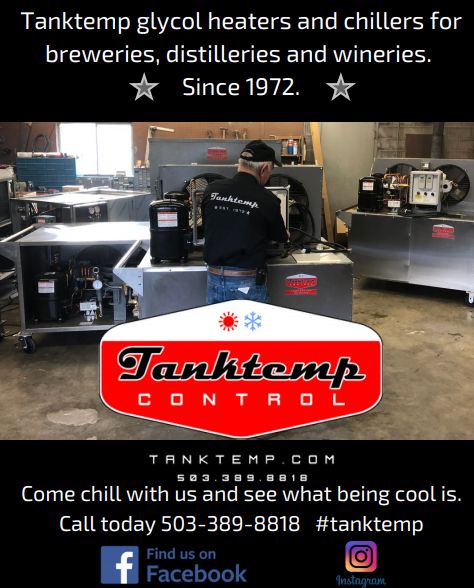