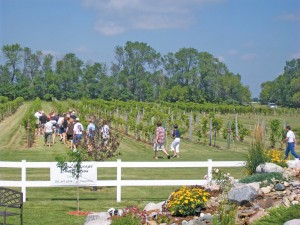 by Sally Colby
Rod and Susan Hogen started a vineyard with a lot of knowledge about growing crops, but grapes would be new to them.
“I was a grain farmer – I grew soybeans and corn,” said Rod, explaining his farming background and transition to grapes. “In early 2003, our historical society held an event, and a gentleman there was from a nearby town and he was starting a winery. He was there to look for people who have plums, rhubarb or choke cherries – things that grow wild here. He asked me if I wanted to grow grapes.”
Rod didn’t think that grapes would do well in his location, but learned that some varieties might thrive. “I called some vineyards in southern Minnesota and talked with folks who were growing grapes there,” he said. “They told me that some of the varieties they were growing were good to minus 30 degrees, which is what we’d need here in North Dakota.”
The couple agreed to try growing grapes, but found that ordering vines from a nursery was all about timing. “When I tried to order in February, they mostly were sold out, but I could get 100 plants of one variety,” said Rod. “That variety was King of the North, a Wisconsin grape. We planted those 100 vines in spring of 2003, then planted another 20 of Swenson Red, a table grape. The Swenson Reds are only good to 20 below zero, but King of the North are good to 35 below or colder. They grew well, so I built trellis and put deer fence around the five acre plot.”
The following year, the Hogens planted 700 vines of several varieties. “People wanted to come out here to see what we were doing,” said Rod. “In 2004, I found that it wasn’t going to work out to grow grapes for someone else, so I thought about putting in a tasting room.” Rod visited vineyards in Oregon’s Willamette Valley to see how successful ventures were operating, and decided that a North Dakota tasting room where people could come and see grapes and taste wine was a feasible plan.
In 2004, Rod purchased an old granary and moved it to their home site in Buffalo, about 30 miles from Fargo. After remodeling the granary, Red Trail Vineyard opened for business in 2005. “We sold rhubarb wine, raspberry wine and honey wine that was made for us, but we put our label on it,” he said.
Today, the Hogens do nearly everything except make wine; which they leave up to two wineries in the state. “We grow and harvest the grapes, destem, crush, press and take the juice to Uncorked, a custom winery in Fargo,” said Rod. “We also work with Wolf Creek Winery at Coleharbor, North Dakota. They take the whole grape and ferment on the skin for more flavor and darker colors.” Rod says that although this plan is working well for now, he plans to make wine on site in the future.
When the granary was remodeled, the Hogens added a commercial kitchen. In addition to wine tastings and vineyard tours, Red Trail Vineyard hosts events such as family reunions, anniversary parties and small weddings. Rod says Red Trail is essentially a vineyard with a bar since they have a restaurant license as well as a liquor license to sell wine and beer. At first, Red Trail used a distributer to market wine outside the vineyard, but changes in the law allow North Dakota wineries to self-distribute wine.
Red Trail Vineyard is on the North Dakota Beer and Wine Trail that’s advertised through a brochure available throughout the state. Rod has found that many of the people who stop in at the vineyard are there as a result of having picked up the brochure.
One popular Red Trail event is the Friday Nite Supper Series; started several years ago. “It’s by reservation only, and we are booked pretty quickly,” said Rod. “It’s a family style supper, and people may be seated with people they don’t know. But by the end of the evening, they’re often life-long friends.” Rod added that the inside dining area can accommodate about 25 people; more if weather allows the supper to be held outdoors. Guests can enjoy Red Trail wines, selections from other wineries, or beer.
Visitors who are interested in learning more about growing wine grapes can take advantage of weekend tours. Rod says people who go on vineyard tours are very interested to learn about the entire wine making process. “I explain that Chardonnay, Merlot and Riesling would die here,” he said. “All of our grapes are cold climate varieties crossed with a wild grape that’s been growing in North Dakota and Minnesota for hundreds of years. That’s where the hardiness comes from.”
Rod also explains to visitors the importance of controlling wind and water erosion, minimizing weeds and preventing deer damage with electric fence. “It helped a lot that I was already a farmer,” said Rod, adding that he was prepared for the inevitable variations that would occur from year to year. “The weather is the big challenge and we just take it as it goes – there’s nothing we can do about that.”
Red Trail Vineyard participates in Harvest Hosts, an organization that provides a camping option for travellers. “We don’t have hookups, but most of the people who come are looking for a place to pull in, do a wine tasting and leave the next morning,” said Rod. “One Friday we had a call from some people who were in Sioux Falls and wanted to spend the night here. They joined us for the Friday Nite Supper, and said they had a wonderful time.”
Visit Red Trail Vineyard online at www.redtrailvineyards.com.