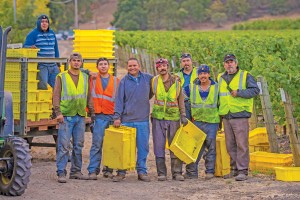 SAN FRANCISCO, CA — The 2015 year delivered California vintners and growers across the state another stellar vintage. Despite a lighter crop — compared to last year — from one of the earliest seasons on record, wildfires during harvest in some regions and a fourth year of drought, quality is high across the board. A mild winter causing early bud break, followed by protracted bloom and unseasonably cool weather in spring, contributed to smaller grape clusters and variable crop size. An intense, compacted harvest began in July for sparkling wines and some still white wines, and was finished for most wineries by the end of September. The crop is estimated to be nearly 3.8 million tons, according to industry experts.
“The quality of the 2015 vintage for California statewide is excellent,” said Robert P. (Bobby) Koch, president and CEO of Wine Institute. “After three record harvests, a lighter vintage will not impact our supply of California wines for wine lovers nationwide and throughout the world.”
“Harvest started 10 days or so early in our north and central coast vineyards because of the warm weather and reduced crop size,” said Keith Horn, VP Grape Management for Constellation Brands. “Happily, we harvested superior quality grapes, just a little lighter crop.”
“This year is only the third time since 1982 that harvest has finished in September, so to say that this is an early season understates the point a bit,” said Cameron Perry, winemaker for Groth Vineyards & Winery in Napa Valley.  “This year lines up fairly well with 1997, one of the other three September finishes. Yields have been down across the board, but this is not surprising, as we are coming off of an unprecedented run of three large harvests (’12, ’13 and ’14). Though there isn’t a lot of it, the quality of the crop this year is exceptional. All the Cabernet ferments are showing big, rich, ripe fruit in great balance with the tannins, and the color metrics are off the chart this season. 2015 should prove to be another in an epic string of superior quality vintages.”
“This year was the earliest harvest in my 46 years as a winegrower,” said Richard Sanford, owner of Alma Rosa Winery & Vineyards in Santa Barbara County, primarily producers of Pinot Noir and Chardonnay. “We began on Aug. 10 and were finished by Sept. 8. Others in our area have experienced similar early ripening. The tonnage of grapes is lower than the last two vintage. The quality is superb and will make excellent wine. I would say 2015 is an excellent vintage for wines from the Santa Rita Hills.”
Tracey Hawkins, co-founder of Hawk and Horse Vineyards in Lake County, is also excited about the harvest, in spite of the Valley Fire that swept through parts of the region in September. “Lake County has seen an early and slightly light 2015 harvest, with some wineries recording their earliest harvest to date,” said Hawkins. “It was a hot, dry summer, which made the fruit from this vintage very flavorful — and may account for the lightness and earliness of the vintage. Most report tonnage approximately 10 percent lighter than usual, however, others report slightly larger than normal tonnages. Fruit quality across the board is stellar.  Harvest was delayed for some when the Valley Fire struck, but harvest resumed in most areas within four days.”
“The drought clearly had an effect in this 2015 vintage,” stated Montse Reece, winemaker for Pedroncelli Winery in Sonoma County. “This has been an early and light harvest, with smaller berries and concentrated fruit flavors. The high temperatures in August and early September accelerated maturity and picking times. Yields were 20 percent lower on average. I’m seeing mild acids, moderate to low alcohols and intense aromatics in all our varieties. This is a vintage of exceptional quality.”
There was more praise for fruit quality from Aaron Lange, who is in charge of viticulture operations at LangeTwins Family Winery & Vineyards. “The 2015 vintage in the Lodi appellation was early, light, and intense,” said Lange. “The season began almost three full weeks ahead of normal and was complete by the end of September. Red varietals, like Cabernet Sauvignon, had light yields across the board, mostly due to loose clusters and small berry size. Throughout the season, we worked hard to keep up with the fast-paced harvest to deliver winegrapes to wineries at the optimal time with winemakers loving the concentrated colors and flavors of the fruit.”