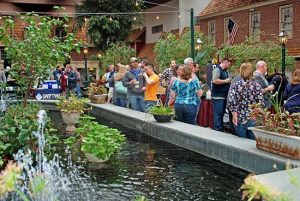 by Michael Wren
ALBANY, NY — As New York’s craft brewing initiative gains momentum more and more craft brewers are emerging to showcase their creations and with the newly stimulated craft beverage market comes a group of beer drinkers looking to put an end to their small beer selection and find a brew that suits their taste buds. On March 25, brewers and consumers from across New York met at the Desmond Hotel in Albany to taste and talk all things beer.
The event drew over 50 brewers and hundreds of beer lovers. Tickets sold out before the event leaving those looking to get in at the door thirsty. Food sampling was also provided by local restaurants.
Brewers came for three main reasons — to display their products, to meet with the consumers and to talk with other brewers about how each of them is making their way in a booming frontier of craft brewing. “It’s definitely a marketing event for us,” says Suzanne Olson of Red Shed Brewery in Cherry Valley, NY. Olson left her job two years ago to help her father carry on the brewing business. She came looking to gain exposure with the public as well as meet and network with other brewers.
This was the fourth craft beer festival for brothers Curry and Jessy Jolicoeur of Oval Craft Brewing in Plattsburgh, NY. They opened May 13, 2016 and came looking for gain popularity across New York and give consumers a chance to try their northern beer.
C.H. Evans Brewing Company brewmaster, Scott Veltman, came with a new batch of their Handsome Guy P.A. which began as a collaboration with another New York State craft brewery.
With hundreds of people trying hundreds of different craft beers came a pleasant conversational time where those who love making beer could share and explain it with those who love drinking it.
As craft beer popularity continues to rise festivals such as this will continue happening across New York giving everybody a chance to partake in the joys of the craft beverage world.