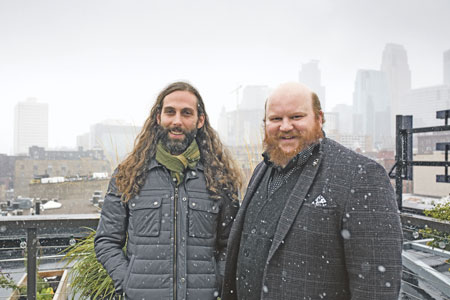 by Karen Van Wyk
Nine years ago, Bittercube, a slow crafting bitters production company, was birthed. Two gentlemen, Ira Koplowitz and Nick Kosevich, left well paid bar managing careers to explore an exciting adventure in the creation and distribution of bitters. What kind of unique venture have they developed?
Kosevich from Minneapolis and Koplowitz from Chicago discovered that in Milwaukee there were no companies producing bitters. Kosevich and Koplowitz’s business partnership began from a shared innate drive to succeed, with a reliance on that drive.
They have been working out of a 3,000-square-foot leased building in Milwaukee yet they have been outgrowing this facility. They are now getting ready to move into a 9,000-square-foot building that allows them to function fully in their business.
Bittercube will have a tasting room in their new facility where customers can explore the varieties. The company has found their success in the unique botanicals and the precise care they take in finding and preparing all-natural ingredients. They do not look to cut corners but take time in uniquely crafting their bitters. The number of varieties, including cherry vanilla bark, orange, and blends of various spices and fruits, demonstrates this well.
Koplowitz has gravitated toward the role of managing the bitter production while Kosevich focuses on the consulting side of the business. Kosevich has chosen to reside in Minneapolis handling the event planning, weddings and corporate parties.
Koplowitz is in Milwaukee where he continues to develop craft cocktails. One main developing focus of the plant they are moving into in Milwaukee is that it has more availability for public view. People will be able to enter and see how these crafted bitters are made from scratch.
On the production end, cocktail tastings and demonstrations are done on a weekly basis. Bitters are sold at trade shows, consumer shows and liquor stores, and are growing in sales.
Kosevich has planned awe-inspiring events already, one of which was a 6,000 to 8,000-person food and wine event in Milwaukee, as well as one in a convention center in Minnesota. Another example is an event planned for an audience of six for educational purposes. Since bitters are not as well known as the spirits they are usually mixed with, some education is needed. Bittercube seeks to inform the public and supply unique concoctions for specific events.
The biggest challenge reported has been in quality control, which Kosevich and Koplowitz are very careful to maintain. Bitters change seasonally depending on what they find fresh. If they seek a supplier, the origin must be traced to assure like quality. Their method is not to produce as much as they can in a short time but to take time to choose ingredients carefully – starting with peeling the oranges by hand, for instance.
Both Kosevich and Koplowitz understand the importance of having employees that feel pride in what they do, as the bitters are people-made. The pair have dealt with some turnover of employees but now feel confident with the 14 full-time employees they have in the company.
Bittercube has become well known and sought after due to their handcrafted, natural ingredients and through some publicity they received.
Beginning with carefulness and high standards, these bitters are crafted to bring an excellent experience to those who enjoy them in cocktails. Because both Koplowitz and Kosevich have an innate drive to succeed, their differing skill sets and their vision tell the story of the foundation they have built which has propelled Bittercube to grow – and to keep growing.