A ‘magnificent money loser’ that’s music to the ears

There is no doubt about it: founding and running a brewery is a business. For some it is an experiment, for others a passion – some might even tell you it’s a calling – but it is always a business. That can make it difficult to see success as something independent of profit. And it is not often that the owner of a business gleefully tells you about his latest “magnificent money loser,” but that is exactly what you’ll hear these days at Bike Rack Brewing Company in Bentonville, AR.

Founded just four years ago, “Bentonville’s Oldest Brewery” has met with a great deal of success. In that short period of time, this initiative of Jeff Charlson, founder and co-owner of Bike Rack Brewing (named in honor of northwestern Arkansas’ vibrant mountain biking scene) has grown by leaps and bounds. In addition to the original brewhouse location in Bentonville, satellite taprooms have been added in both Bentonville and nearby Springdale. Originally featuring four core offerings – BRB staples Fast IPA, Slaughter Pen Pale Ale, Urban Trail Golden Ale and Angus Chute American Stout – the brewery now produces six different beers in cans for sale as well as over 15 selections in their taprooms.

“We’re now producing 3,000 barrels a year,” said Charlson. “We’re where we want to be right now, expanding the way we hoped we would. Our next big release is our double IPA in honor of our fourth anniversary.”

And as for that “magnificent money loser”?

“We believe in giving back to the community,” explained Charlson. “People recognize that beers can be great when sampled locally. The same is true for art. We’ve chosen to concentrate on music.”

Charlson has taken a big step toward helping local musicians get their start by creating a record label for Bike Rack Brewing. “After all,” he laughed, “beer and music have always gone well together.

“Bike Rack Records focuses on helping Arkansas-based artists – people who are performing their own stuff, not just covers of other musicians’ work. We’ve put together ten local acts. They perform everything from alternative music to pop to what I like to call Americana. It’s really great stuff – a lot of variety, a lot of unique sounds,” Charlson explained.

“It’s so hard, and expensive, for these artists to get their start. We have partnered with local recorder Haxton Road Studios and offered them a freebie, a chance to cut an original song of their own, and they keep the rights to their work. A recording session like this can run upwards of four or five thousand dollars, so we’re lucky enough to help these talented people overcome that initial hurdle.”

Charlson said the entire project will cost his business about $40,000, and he expects to recoup a little under half of that amount, hence the “magnificent money loser.” 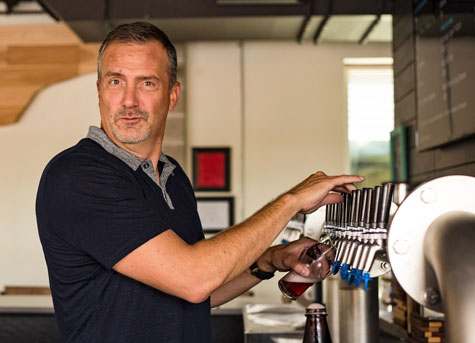 “But I view this personally as we’re a brand. This would be like sponsoring some sports event. We feel like this is a marketing vehicle to support local artists that have a deep personal connection with us already. These artists have history with us. They perform at our locations in our taproom concerts. Many of our regular taproom patrons have had the chance to see these fantastic musicians live, and it’s given them an opportunity to increase their exposure and grown their fan base.

“And if everyone should happen to throw back a few of our beers while they’re listening,” Charlson said, “I’m just fine with that.” He went on to say that larger concerts have been in the works – they just hosted one that drew over 450 people.

“In addition to being able to hear these artists on iTunes and Spotify, we just got our first shipment of old school vinyl records to our brewery. People have been very receptive to them. There are a lot of 25-year-olds out there who have just gotten their first turntables, and we’re hoping that after a few of our stellar beers, they might just indulge in an impulse buy of some vinyl,” he joked.

Charlson remains optimistic and always on the lookout for new ways to integrate Bike Rack Brewing into the community. “We’ve had a lot of success with musicians, and we’re now looking into joint events with local art museums and galleries to find great pairings between our beer selections and the art patrons can view while they enjoy our stuff!”

For more information on Bike Rack Brewing, visit www.bikerackbrewing.com. The documentary on the creation of Bike Rack Records Vol. 1 is on the brewery’s Facebook page.