A passion for bourbon and vodka 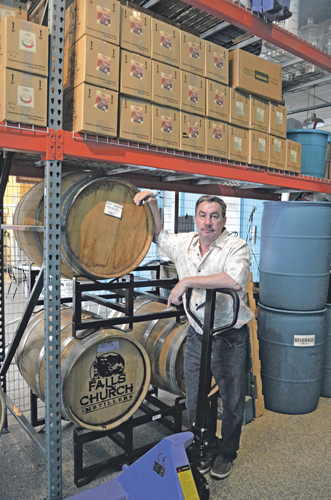 Michael Paluzzi grew up in a town largely populated by Italian immigrants, most of whom made their own alcohol and served it at every meal.

“Nobody could afford to buy it,” said Paluzzi, referring to the traditional wines and liquors made from family recipes. “Everyone was making it. As I got older, I followed the industry and lived in the San Francisco area for 10 years, where I developed a taste for good wine.” Paluzzi’s son Lorenzo is a chemist, and the two paired their talents to establish Falls Church Distillers in Falls Church, VA.

“The decision to open a distillery was more of a market dynamic and financial decision,” said Paluzzi. “I don’t drink beer, so a brewery was out, and doing a winery ‘right’ is an expensive venture.” While Lorenzo appreciates bourbons and gins, Paluzzi has a passion for bourbons and vodkas. “We figured we could bring our passion into this product.”

Paluzzi explained the approach they’ve used to develop a unique array of spirits.
One key factor is how a spirit pairs with food, and the dynamics of different mixtures. For example, gin production involves different binders, so the goal is to find a flavor that can be manipulated. “We spend a lot of time developing recipes,” said Paluzzi. “We do a five-gallon version before we run the big 1,000-liter still. We build flavor profiles one-half or three-quarters of a gallon at a time.”

In addition to Lorenzo serving as head distiller, Kallie Stavros is on board to head up yeast development. “For a distillery, yeast is a big part of intellectual property,” said Paluzzi, adding that they’re working on some interesting hybrids and blends. “As an engineer, I’m the troubleshooter, but the chemists bring protocol establishment, which is the key to recipes.”

Another shared father-son goal was to create stand-alone spirits that didn’t require mixing. “We targeted the vodka to a Russian standard,” said Paluzzi. “To get to that taste, we combined neutral spirits produced from half wheat and half sugar cane. It’s a very sweet vodka – you can’t mix it with a sweet juice. You have to mix it with pineapple or something to offset the sweetness. Otherwise, just enjoy the sweetness by itself.”

Paluzzi knew one critical factor in creating distinct spirits was the water.
He sent tap water samples to several labs for analysis, then installed a filtration system. “We clean out all the chlorine and bromine that makes water potable,” he said, “then create a level of minerality for the proper taste and fermentation process, clean out heavy physical particulates and kill bacteria.”

In keeping with regional tradition, Falls Church Distillers’ bourbon is a true Virginia-style recipe, with enough time in the barrel and enough rye that it has a bit of pepper on the back and a bit of spice. “The eight percent rye is very drinkable metered with an ice cube,” said Paluzzi.” The whiskey is like an Irish whiskey – that’s what we modeled it after. The one we’re experimenting with now is an ancient whiskey.”

The use of gin baskets and steam infusion keeps most of Falls Church spirits crystal clear. However, one experiment yielded a tinted product. Paluzzi explained that when he added hydrated pepperoncini the resulting product had a hint of green. “When we first tasted it, the tingle was on the tip of the tongue, which was interesting,” he said. “As we filtered it, the tingle from the pepper moved down into the throat. We didn’t want that, so we tried to move it so we’d get the best flavor sensation from peppers. Now we leave a little color in it because the filtering process to leave the sensation on the back of the tongue demanded that we leave a little color in it. We were willing to sacrifice the clearness for the right flavor on the back of the tongue.”

True to his Italian roots, Paluzzi wanted to create an original gin that tasted “Italian,” even though Italy isn’t known for gin. “We enjoy the Hendrick’s flavor profile, although it’s heavy in some areas,” he said. “Our gin starts with very low juniper up front because we don’t kettle it. A lot of distillers put their gin in a kettle and put other herbs in a gin basket. We put our juniper berries in the gin basket as well.”

The gin recipe begins with 50 percent juniper berry along with grapefruit, elderflower, chamomile, coriander seed, angelica root and anise seed. Paluzzi adds lemon verbena he grows himself. The result is citrus-forward with a flower sensation. “It surprises people,” said Paluzzi. “However, that’s something we took from Hendrick’s. If you drink a Hendrick’s gin, there are a lot of flowery sensations. We use chamomile and elderflower for a flowery sensation and finish with anise, which is where we put the Italian mark on it. The lemon verbena provides a more citrus nose and hides the anise.”

Paluzzi and his son recently developed a unique rum liquor. “We use our rum tails,” he said. “When we finish running a batch, we have 200 gallons of 20 percent alcohol sitting on the bottom. We get about 150 gallons of a blend of premium beers from Mad Fox [a local brewery] and run that through the still. Because hops can be a little bitter, we add pure sugar cane, run it again through the 14-plate still, and it comes out really nice. Then we got 10 pounds of dark-roasted coffee beans from a nearby coffee roaster and used that for flavor.” The result is Velocita Rum Liqueur, and at 60-proof, the product is the first to stray from 80-proof.

In addition to producing fine spirits, the initial concept for Falls Church Distillers included a full-service restaurant. “It’s the business model I always sought,” said Paluzzi. “I wanted to go beyond the tasting room with people just stopping in to taste, then leaving.” The casual eatery is inviting and brings in customers of all ages, and is a popular venue for both small and large events.

“Everything we do is about family,” said Paluzzi, adding that he knows and interacts with those who stop in regularly. “Once you’ve been here three times, you’re family.”