A pioneer in Lodi, The Lucas Winery is known for well-balanced Zins and Chards 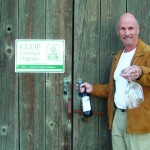