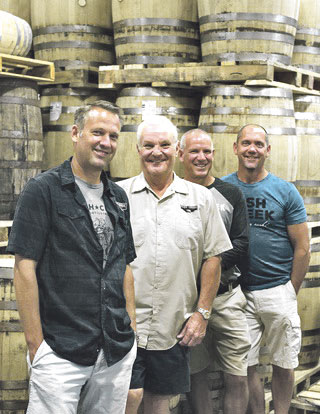 Brothers Mark and Todd Stricker along with Jay T. Nolan and Jeff McCarthy are the owners of Rush Creek Distilling. An adventurous spirit clearly fits the energy and productivity of this company and is also their tagline.

The small town of Harvard, IL, the milk capital of the world and Big Foot Prairie, is the home of the distillery. The Big Foot Prairie is a highly productive farmland in the United States. The cool, fresh water creeks in the area are also renowned.

Harvard, IL, is distinctly known for their grain and good water. The owners of the distillery wisely investigated how they might convert this pristine agricultural area to create a unique business.

Mark Stricker said, “We walked into a bar and came out with a distillery.”

If not literally true, it is figuratively. The men met and discussed their dreams and ideas together, and so the concept of Rush Creek began. They have been open for more than a year to the public. Prior to opening was a six-month search for initial best practices, followed by a year to obtain licensing, purchasing equipment and performing due diligence to insure all went smoothly. Since their opening the adventure has continued.

Rush Creek is primarily run by the owners, but they do have two other full-time employees as well as one part-time. 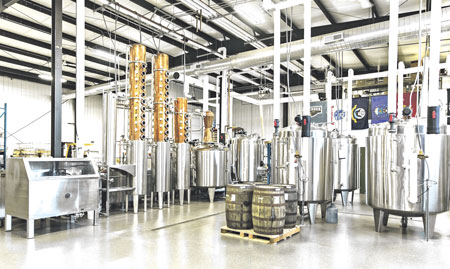 Rush Creek is a busy operation; they hold private events, tastings and tours at the facility. The private events are in the Founders Loft, which holds 60 people. Tours are given in the production area. The tasting bar is downstairs and it draws many to sample their delicious spirits.

Rush Creek Distillery seeks to grow within the area they are placed, within a 100-mile radius from four major cities holding 14 million people. Rush Creek is building a brand that is recognized in that region for the cold springs and the nutritious soil that grows the grains used for their spirits. They make the batches small and carefully craft each one. The proof is in the tasting!

Mark and Todd advise newcomers to the industry to expect to need more money than initially planned and much more effort than realized, for nothing is guaranteed. This is where an adventurous spirit can weather storms. They received advice from one in the business 40 years when they were first starting out and he said to “take whatever money you will spend and double it, and then go to Vegas and gamble it.” This is an adventure.