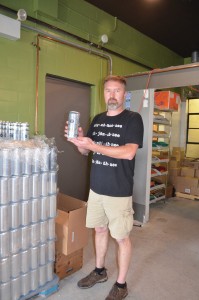 by Sally Colby
Jon Northrup and Mike Price started their brewery in Ephrata, PA during the spring of 2010 with a simple plan: To brew on weekends and be open for sales on Saturdays. It didn’t take long for the one-barrel nano-brewery to become popular among local craft beer aficionados.
Although Jon and Mike hadn’t necessarily planned on operating the brewery full-time, within a few months they realized someone would need to be there fulltime. “Since that time, which was around March of 2011, Jon has been doing everything everyday and Mike did what he could along with help from volunteers,” said Dain Shirey, who joined the crew as co-owner and director of marketing. “Mike just started full-time last fall when we put the new brew system in.”
St. Boniface Craft Brewing Co. is located in a fairly conservative area, “We’ve had a lot of support from Ephrata since we started, from both the borough and community members,” he said, adding that the building they started in was slated for demolishment. “We really wanted to stay in Ephrata because of the community support.”
St. Boniface is one of the patron saints of brewers, according to Dain, the Saint helped convert Germanic tribes to Christianity by cutting down oak trees that they had worshipped; St. Boniface accomplished something that people thought couldn’t be done and as a result, they converted to Christianity. “Our take on that is to cut down the big beer companies and convert people to drink better beer,” said Dain.
The name of St. Boniface’s first beer, Hegemony, was carefully chosen to reflect the brewery’s philosophy. The word means leadership, or dominance and it’s a perfect fit for the inaugural beer. “One of the tag lines on our cans is ‘convert the masses’,” said Dain. “We want to introduce people to better beer.” Hegmony sold out the first night the brewery was open.
When they opened, they had a one-barrel brew system, but when they became more successful, they upgraded to a three-barrel system; the equivalent of six kegs. “Last fall, we upgraded to a 15-barrel system with full fermentation — we can produce a lot more beer than we could before that,” said Dain.
St. Boniface’s first beer was offered in 22 ounce and 12 ounce bottles but with the major equipment upgrade, the owners decided to switch to cans. Dain explains the switch from glass bottles to cans simply made sense to add a modern canning line with the expansion.
“Cans can go a lot of places that bottles can’t, like to the beach or camping,” said Dain. “One of the biggest enemies of beer is light exposure, and cans help minimize that. Cans are like a keg — there’s no light. Canning is becoming more and more accepted in craft beer, thanks to some of the larger companies who got on board with it.” Today, St. Boniface beers are available in 12-ounce cans as well as crowlers. “We’ll fill a can with any beer we have on tap, put a lid on it and seal it, says Dain.
St. Boniface owners have found that the upgrade and expansion hasn’t required any more time or effort for the same level of production. “The brew cycle on small system takes the same amount of time on larger system,” said Dain. “We’re already in a situation where we can’t keep up with demand or add new accounts. Everything we’re producing is going out the door as fast as we can get it made and packaged. It’s crazy to think that a year after getting the new brew system on line and we can’t keep up.”
St. Boniface doesn’t have a kitchen but they offer food in a very west-coast style. “We wanted to introduce food, but we didn’t have the manpower or capital to put into a full kitchen,” says Dain. So instead, they have an agreement with several local food trucks. Dain views the food truck concept as customers being able to come to the same place every week for beer, but in a different restaurant. “It’s a good thing, and people can support two local businesses at the same time,” he said. “On Fridays and Saturdays, we have one truck so there’s no competition. For special events, several trucks are available.”
St. Boniface owners believe that although there are a lot of new craft breweries opening up, if they produce quality beer that people will try, those people will keep trying more new craft beers. “We all have a bigger goal,” said Dain. “There’s a large market share that we can all get a piece of if we do it right.”