Adding a craft distillery to the family farm 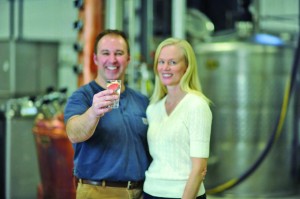 by Bill and Mary Weaver
After working high pressure jobs in Minneapolis — Cheri Reese as head of her own public relations firm, and her husband Michael Swanson as a business-to-business marketer with territories in Central and South America — both wanted to settle down to a slower life.
“We were small town people who grew up in northwestern MN,” explained Cheri. “We had the advantage that Michael’s father was still farming a 1,500 acre farm there. Michael was looking forward to being the 4th generation on that farm, thinking of growing grain and sugar beets.” The big question was how to make a profitable living without expanding farming operations. The answer became Far North Spirits in Hallock, MN.
For his MBA, Michael had written a business plan for a craft distillery from the perspective of having a farm which made the product from start to finish, so the profit margins would be better. “We decided this was what we wanted to do,” explained Cheri. “but it took us two years of planning and touring distilleries all over the U.S. before we broke ground.”
Far North Spirits uses 300 acres of the farm to grow all the grain they distill in a year. Their market is folks who want local, organic and sustainable food. “Our grain is non-GMO and sustainably grown. We want to be as intentional and thoughtful and purposeful as possible in how we grow our grain. There’s been tremendous interest in what we’re doing. We have a ‘Minnesota Grown’ license for gin and whiskey. The Red River Valley grows some of the best grain in the world. We have fresh water and a tradition of farmers who take pride in growing great grain.”
Their timing was right. In 2010, Minnesota passed a law that changed the fee for a craft distillery license from over $30,000 to about $1,500. Until that law changed, there was only one distillery in the state. Since then, the number of craft distilleries has blossomed, to include about 20 micro-distilleries in various stages of planning in Minnesota at present.
This year, they released a gin that is 100 percent rye based and made with several botanicals including juniper, grapefruit peel and thyme.
“In September, we harvested the rye, had it cleaned, and brought the cleaned grain to our distillery. Our roller mill ground the rye to about the consistency of corn meal,” explained Cheri Reese.
Then a flex augur moves the ground rye into a huge cooker, a mash tank that holds 650 gallons and cooks it in 200 degree water.
Once the mash is in the still, the whole alcohol process begins.  “The still has eight columns. Each one looks like a porthole — and each one drives the proof higher,” Reese continued.
“We taste what’s coming off the still and make three cuts. It’s important that Michael has a good palate and a sense of taste of what he’s looking for, which is to ‘cut off the heads and tails, and leave the hearts,’ where the flavor is really great.”
Michael’s minor in chemistry gave him a basic foundation for how distilling works. To learn some of the tricks of the trade, he trained with three craft distilleries in New Richmond, WI, Chicago and Denver. Far North Spirits is also a member of the American Distilling Institute, a trade group representing 400 craft distilleries nationwide. Their annual spring conference provides novice and experienced distillers alike with a “soups to nuts” view of all things craft.
In February, Far North Spirits begins making whiskey from rye and corn grown on the family farm. For whiskey, the liquid is distilled to 145 proof. “We want some flavor left to interact with the wood in the barrel. By law, if you’re calling it whiskey, you must use new charred oak barrels.” Fortunately there are two cooperages right in Minnesota. “They were shipping a lot of barrels to Kentucky. It’s nice that some of the barrels will now be used right here in Minnesota,” added Reese.
For gin, the mixture is distilled to 190-proof. “We want a blank canvas, stripping away all the flavor compounds. We take all the ‘hearts’ we collected, and put them in a 50 gallon tank. This is where the real artistry starts. There are hundreds of different kinds of botanicals you can use, so you’re allowed a lot of creativity.”
“A lot of distillers will buy ethanol from a large manufacturing plant and get right to the creative stuff.” Cheri Reese continued. “We decided it’s important to us and to our customers to do the whole process from start to finish.”
Marketing
Distribution of distilled beverages is highly regulated. “We can’t sell what we distill directly to customers, the way winemakers can,” noted Reese. “It’s a Prohibition-era law. We must sell to a distributor, who then sells it to a retail outlet. Although some states allow it, you can’t be a manufacturer and a distributor and a retailer in this state. This law originally had something to do with preventing corruption. We’re hoping Minnesota laws will be updated to allow us to sell our own spirits out of our tasting rooms, just like the wineries and breweries here do.
Working Together
“This week,” Cheri Reese concluded, “we have another craft distiller visiting us from Isanti Spirits. We don’t see each other as competition. We’re working together to put Minnesota on the map of craft distilleries. Distilling and farming is a marriage made in Minnesota. We love what we do, and we’re excited to be on the front end of a new industry that will mean a lot to both farming and tourism here in Minnesota. What we’re doing doesn’t even feel like work!”