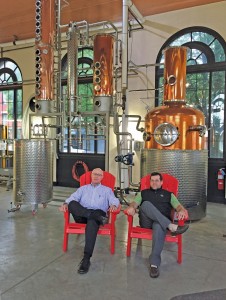 by Alex Huebner
Drinking at the office usually benefits no one, but for Jordan Karp, then a political analyst in Washington, D.C., a glass of vodka at work was an inspiration. “I was in my office at about 11 o ‘clock at night on a Tuesday and I had a bottle of vodka in my office. I was bored so I had some and was like — you know, I wonder how hard this is to make.”
That passing thought led to Karp emailing a friend to ask, “How he felt about making some booze.” That friend was Steven Cox, an assistant District Attorney for Oneida County in upstate New York. Cox emailed back that is was a terrible idea, seemingly putting a kibosh on Karp escaping office life. However, when Cox later mentioned the idea to his friends Bruce and Anita Elwell, they thought it was a great idea and wanted in.
So it began; Karp went on to study distilling at Cornell Distillation School, Bruce and Cox signed on to help run and fund the distillery with Karp, while Anita became business manager.
When it came to figuring out where to open up shop, upstate New York was one of the first places to come to mind. Craft distilling was just starting in the area, so the idea was to strike the market right before it got hot. “New York was right in the midst of changing its laws and you sort of recognize the opportunity,” said Karp.
Utica, NY easily became their destination of choice, with all involved having ties to the area. Master Distiller Karp came to the city in 2006 to do political work and quickly fell in love with the city. Cox still is an assistant District Attorney and Bruce, president of the distillery, is a doctor who practices in a near by town. They settled into a former bank building on historic Varick Street, home to F.X. Matt Brewery and several small craft beverage companies and pubs.
The local community was starting to make a comeback after years of disappointment. “For every new job that we make, you create three jobs in the community. Utica used to have hundreds and hundreds of little businesses and that made the community really strong,” said Bruce. Karp added, “Jobs here can’t be outsourced anywhere.”
That focus on community doesn’t just end at where Adirondack Distilling Company was opened. It expands the whole production line, from the source of their supplies to the farmers markets they sell at. It even finds its way into the minute details of the distilling process; they filter their spirits through quartz crystals harvested from Herkimer Diamond Mines, located just a short drive away from their distillery. The rock from which the quartz was harvested sits proudly in their foyer, another testament to the pride they have in their community and their process.
When it comes to their process, Karp focuses on making the best, clean-tasting spirits possible, with as many local resources as possible. They want people to enjoy the taste of a pure product. “Consumers have been programmed to think that spirits need to be covered up with sugary drinks or juices to taste good,” said Karp.
To keep up with these objectives, they use a proprietary blend of corn from local farms. The corn is multi-purpose for their company; it’s gluten-free, so more people can enjoy their products, it makes the flavor of their spirits slightly sweeter and it’s local. For their products, especially their vodka, it’s the best choice. Corn is of abundance in Upstate New York, potatoes not so much. The only downside is that corn can be more difficult to work with. “If you overcook it you can wind up with a 500 gallon batch of polenta,” said Karp.
Other than their Adirondack Vodka, they also make Adirondack Gin, 1,000 Stills White Whisky and 601 Bourbon — the only legal bourbon being produced in central New York. They also have a soon to be released Old Oak Gin, aged in barrels. The barrels for whisky, bourbon and aged gin are kept in their basement, with some barrels aging exclusively in their concrete vault with 16-inch thick walls, leftover from the building’s banking days.
They have seen impressive success with their products, despite only being on the market for a few years. Adirondack Distilling Company has acquired a total of 13 awards amongst their vodka, gin and whisky. Their first run of 601 Bourbon, released in June 2014, sold out within 24 hours.
Despite their success, they are happy to stay small-scale for now. They can focus on quality and formulating just the right blend of ingredients to make the best product, instead of throwing money towards national ad campaigns. “The best marketing we have is word of mouth. Happy customers who talk about our product,” Bruce said.
While the craft distilling industry in New York is growing, they don’t see their fellow distillers as competitors, but as comrades. “All the craft distilleries, we’re in this together,” Karp said. “It’s David versus Goliath and we’re all Davids together.”