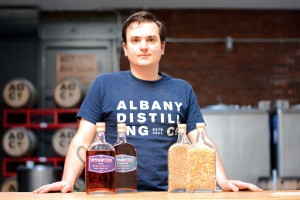 by Katie Navarra
Every ounce of whiskey, gin or rum that comes from a bottle of Albany Distilling Company spirits is a tribute to the history and culture that defines Albany, NY. “During the late 1700’s and early 1800’s the city was widely known for its rum,” explained John Curtin, an owner. Naming the distillery’s rum, Quakenbush Rum, honors the city’s defunct distillery of the same name (Quakenbush Distillery). “We try to incorporate a local theme across the board in the business,” he added. The theme is apparent in the distillery’s entire line of spirits, from the Coal Yard unaged whiskey to an Iron Weed Bourbon Whiskey. “This site was a former coal yard in the 20th century, so that’s how we came up with Coal Yard,” he explained, “William Kennedy, a Pulitzer Prize winning author, wrote the novel, Iron Weed. It was made into a movie and filmed in the city.” A connection with the local community extends beyond the name on a label. Nearly 95 percent of the corn and rye and 85 percent of the malt used to produce the spirits is purchased from New York State growers. “Our goal is to encourage farmers to grow small grains again,” he added.
Born and raised in Bethlehem, a suburb of Albany, Curtain remained in the area to attend the University at Albany, where he earned a teaching degree. “I was a high school English teacher for a few years. Then teaching led to more drinking and so I thought why not cut out the middle man,” he joked. As he considered a career change, he and Matthew Jager, another owner, contemplated business opportunities available. First, they thought a bar was the answer. “But, we didn’t want to sell something someone else made,” he explained. At the time, craft breweries and distilleries were the only viable options. “I’m much more of a spirits drinker personally. Once we got distilling in our heads, the rest went by the wayside,” he said. In March 2011 they applied for the required federal and state licenses. While they waited nearly 18 months for approval, they experimented with different varieties of corn, rye and barley to perfect their recipes. “We had the opportunity to experiment with heirloom grain varieties to perfect the taste and I found that I prefer the taste of dent corn to other varieties,” he commented. During this time, the business partners made another important decision. “We decided to start our distilling process from scratch with 100 percent whole grains. That is a point of pride for us,” he said.
The distillery officially opened in October 2012 and has been building an inventory supply ever since. “We’re pretty small right now with most of our product going into storage,” he said. To build up the stock, the spirits are age 9-18 months before consumption. As they distillery ages they have plans to also produce aged products over a two to three year period. Curtin estimates that his spirits are purchased by nearly half the bars and liquor stores in Albany. “As we increase our supply we would like to expand our distribution north to Saratoga and south to the Hudson Valley and New York City,” he said.
With only a few years of production, the distillery is earning recognition for its quality. Albany Distilling Company earned a Gold medal from the American Craft Spirits Association and three Bronze medals from the American Distilling Institute. While others are rushing to the craft beer and cider markets, the spirits industry is still relatively uncharted. “It made me nervous at first. I couldn’t figure out why no one else had done it, but now I’m getting calls weekly from people who ask for advice on getting started,” he said. As the business continues to grow, he plans to add to a growing staff. “We have a couple of employees now and instead of having to be a jack-of-all trades, we can begin moving into more specialized roles,” he said.