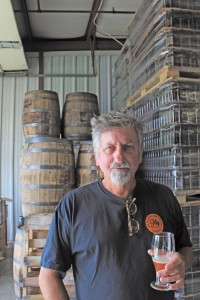 by Karl H. Kazaks
SALEM, VA – “I sort of saw the wave coming,” said Mike “Keno” Snyder, explaining his decision some years ago to get into brewing.
Today he and partner/brew master Ryan Worthington operate a 30-barrel brewery here in the Roanoke Valley, not far from the Blue Ridge Parkway, after which their business is named.
The two opened their brewery in the winter of 2013. As prescient as the two were in predicting a growth in interest in craft beer, they weren’t able to predict the level of success their own brewery would achieve.
“The first night we opened,” Snyder said, “I didn’t know if we would have any retail customers.”
“I thought we might have 30 customers,” Worthington said.
Hundreds of people showed up that first night, and the local interest hasn’t abated, with crowds of two to three hundred people assembling on some days.
The brewery has already become an institution within the neighborhood and local community.
“It’s their place, not ours,” said Snyder.
To accommodate their retail customers Parkway is expanding its tasting room this year. They built an addition onto their production facility that will specifically be used to expand their tasting room, which until now has occupied a slice of the main building. A wall was also erected to separate the retail and manufacturing areas so they can operate both simultaneously.
They’re also adding a new stage and bigger sound system for the regular musical events held at the brewery and are adding to their parking.
When the new addition is complete, the brewery will also open for an additional two days, beyond its current schedule of Thursday to Sunday. They will retain their 8 p.m. closing time.
The development of the brewery into a social spot hasn’t gone unnoticed. In a reader’s poll run by a local newspaper, last year respondents voted the brewery as the best place to meet new people. In second place behind the brewery? Church.
Snyder and Worthington met at another Virginia brewery, where Snyder went to learn about brewing and where Worthington worked after training at the Siebel Institute and Doemens Academy in Munich.
Worthington said his time in Germany was useful not only for what he learned at Doemens but also because he was able to “drink a ton of beer.”
Today Parkway produces about 8,000 barrels per year. Their brewing equipment includes two 120 barrel fermenters, two 60 barrel fermenters, two 30 barrel fermenters and three brite tanks, one of each size. By adding equipment, they could in their current facility maximize production at around 25,000 barrels per year.
Parkway makes four flagship beers, four seasonal beers, a gose, two bombers, and a number of one-offs. They barrel age “as often as we can,” said Snyder.
One of their flagship beers is named after a local Blue Ridge peak, Bent Mountain. With an abv of 7.2 and 67 IBU, Get Bent Mountain IPA is one of the brewery’s most popular beers. It’s made with Cascade, Columbus and Cluster hops.
Parkway also makes a barrel aged version of that IPA. The aging does mute the beer’s hop profile, so when the aging is complete, Worthington blends the product back with a little fresh and dry hops it.
He uses Ella hops when dry hopping, because they like the peach and apricot notes it provides.
A desire to accentuate stone fruit and tropical fruit flavors is why the brewery uses Ella and Summer hops in their session IPA, Factory Girl.
The name of that brew was inspired by a book about Virginia’s history of furniture manufacturing, an industry that has seen a severe decline with the rise of the global economy. Many factories in Virginia are now abandoned, affecting the towns in which they sit, empty, as Beth Macy’s Factory Man depicts.
That book isn’t the only one about the local culture that Parkway celebrates in its “Books and Brews series.” There’s also its brown ale, The Remedy, named after a novel written by a local judge, The Jezebel Remedy.
Parkway has so rapidly become part its community, it wouldn’t be surprising if, in the same way it celebrates local authors with its creations, if some writer features Parkway in a future work.