Ancient beakers and the history of mead 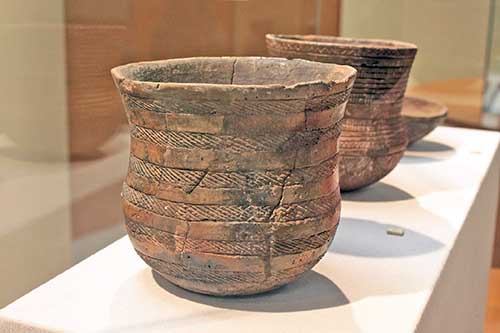 by Melissa Piper Nelson
Call it what you will — mead, meadu, meduz, medd or miod — mead or fermented honey and water has been found and is produced today all across the world. Some early traces of the alcoholic beverage in Western Europe are linked to the Bell-Beaker culture (2,800-1,800 B.C.) so named for the inverted bell-shaped drinking vessels attributed to the people. Signatures of bee pollen and fermented honey “wines” have been extricated from the beakers. Believed to be early bronze traders, the Bell-Beaker culture also knew about growing barley, which reinforces the evidence of beer and mead as a cultural tradition.
Traced across the Iberian Peninsula through Central Europe and into Britain by their distinctive stamped pottery, some researchers believe the culture may be the ancient ancestors of Celtic culture. Both decorated and plain upside-down bell beakers have been found throughout Ireland and far into continental Europe.
Did the knowledge of beer and mead brewing go along the same travel route as the distinctive Bell beakers? Researchers believe that larger beakers found along the culture’s travel and trading routes would have been used for food, beverage storage and exchange. So mead, although produced throughout many early cultures, may have moved around Europe in decorative “steins” before drinking steins became popular.
A recipe for mead is noted in Hispanic-Roman literature from 60 A.D., but it is believed mead was produced in China as early as 7,000 B.C. Where grapes were not able to be grown, mead was produced in various ways including the use of wild yeasts and with varying alcohols levels that ranged from eight to 20 percent. Mead was present in many Germanic myths and made popular as the preferred drink of the Vikings.
Along with overland trading routes, it is believed the Bell-Beaker people utilized trade routes by river and sea as well. The decorative drinking cups may have accelerated the spread of bronze metallurgy along all these exchange routes.
Whatever the journeys these early traders took, it is evident they carried with them their now famous drinking cups and most likely the beverages that filled them. One can thank many an ancient brewer for mead, but without the explorer tendencies of the Bell-Beaker culture, mead may have remained a much-localized beverage separated by distance and culture.