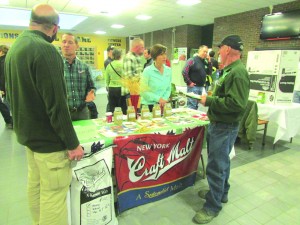 by Pat Malin
MORRISVILLE, NY — Charlie Matt conducts his hops business in Switzerland, but he nevertheless felt it was vital to attend the annual Northeast (NeHA) Hops Alliance at Morrisville State College in central New York this past December. Matt, the president of C. Matt GmbH in Zurich and former global director at SABMiller, was invited to give two presentations on maintaining hops quality. Farmers, brewers and vendors sought him out frequently for his knowledge of the world hops market.