Another first for Lakefront Brewery 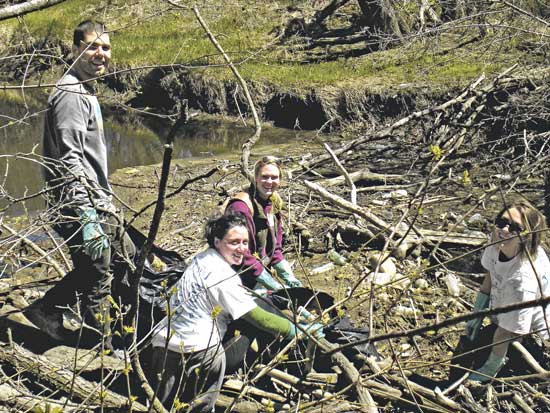 by Laura Rodley
Lakefront Brewery has many firsts. They brewed the first beer in the United States to be made of 100 percent state grown ingredients, became the U.S.’s first certified organic brewery in 1996 and created the first gluten free beer granted labeling approval by the U.S. Government.
Co-founded in 1987 by brothers Jim and Russ Klisch, it is now owned by Russ Klisch, with his brother is still actively involved. Brewing is in their blood. Their grandfather drove a delivery truck for Schiltz and several family members had owned taverns. Initially, the two brothers started with an old home brewery, learned how to make beer, and checked out breweries.
“We thought…maybe we could do this. We went to national brewery conferences — which were much smaller in the 80s and 90s — and came back to start our own. We didn’t want to start off too big so we wouldn’t lose any money,” said Russ.
They kept their day jobs and brewed on weekends in 55-gallon stainless steel drums, making 60 gallons of beer at a time, which would sell out. As it became more popular and more bars and restaurants asked for it around town, they bought a walk-in cooler.
At first, they used soda kegs, then graduated to buying used bulk dairy tanks. They kept on adding pieces of equipment, piece by piece. They began bottling beer in 1990.
They converted the 1,500-squarefoot former Milwaukee Electric Railway and Light Company’s power plant to a brewery while expanding it by 2,400-squarefeet. A 50-barrel brewhouse, they have 32 fermenters and seven brite tanks. They distribute beer to 35 states, the Ukraine, Finland, China and Canada.
Prior to 2005, “Beer had to be made with 25 percent malted barley, and also corn or rice making up the rest of the ingredients,” said Klisch. Throughout 2005, he worked with the U.S. government to help them formulate regulations regarding making a gluten free beer.
The same year, he brewed a beer to be granted gluten free labeling. They sell gluten free New Grist, allowing people with celiac disease to enjoy a beer. Rather than the malted barley contained in their other beers, it has water, sorghum, rice, hops and gluten free yeast.
“It’s very popular. It’s the number one craft beer in Canada, in some of the provinces,” said Chris Ranson, Lakefront Brewery’s Tours/Environmental Director. They have since added a ginger variety.
Klisch was instrumental in getting local farmers to begin growing hops, resulting in their beer Local Acre. They also got the farmers to grow the organic hops necessary for use in organic beers.
They are the first brewery to use 100 percent in-state ingredients, including an indigenous Wisconsin yeast strain called Wisconsinite Summer Weiss.
They are the first to offer online brewery tour tickets. Their very popular restaurant features salt-covered doughy pretzels to beer cheese soup and a Friday Fish Fry, accompanied by the Brewhaus Polka Kings, in what is “very close to a German style Beer Hall, but it is American,” said Klisch.
In 2007, they were the first brewery in Wisconsin and the first Milwaukee business to earn a coveted Travel Green Wisconsin certification, sponsored by Wisconsin Department of Tourism. People looking to frequent green businesses like hotels, restaurants or breweries, seek out this distinction. “It’s for people who want to spend their money on a business that’s kind to the environment, instead of wasting resources…,” said Ranson.
The brewery is also a founding member of Local First Milwaukee, a group of local businesses dedicated to sustainability.
Lakefront Brewery adopted about a mile along the Milwaukee River where the brewery is situated and organizes annual spring and fall river cleanups. They work with Milwaukee Riverkeeper, a science based nonprofit that advocates improvement of water quality and keeping the river clean for fishing and swimming. The brewery donates barrels and space to hold community rain barrel events, where people paint barrels that they then bring home. “It’s twofold. It encourages urban gardening and keeps that rainwater out of the sewer system,” said Ranson. Each barrel is hooked up to the house’s gutter with a hose to catch rainwater, so it doesn’t wash away into the street and overflow the city’s sewers, or rush across asphalt and concrete, gathering trash and contaminates along its way that are washed into the river, she added.
In keeping with their green philosophy, in early October a 264-module solar array was installed on top of the warehouse, set to produce 85,000 kWh annually and to supply up to 39 percent of the electricity used by the warehouse’s giant cooling refrigerator.
Working together with SunPeak and their local energy company, they received a $25,000 renewable energy grant to help defray the systems’ cost of $125,000.
“We use more energy at night than we do in the day. We don’t max it out,” said Ranson. It will save them $500,000, if all things remain the same, over the system’s 30-year lifespan.
“Part of doing this is doing anything we can do to leave less of a carbon footprint,” said Ranson.
They started the involved process last year by hiring an engineer to inspect the warehouse roof to make sure it could hold the solar array. The electric company had to make sure it had enough power coming to the building, and they had to complete all the paperwork to gain grant approval. It does snow heavily in Milwaukee, but the panels are set at an angle to let the snow melt off and are not supposed to require snow removal.
What does Klisch like best about owning a brewery? “Good beer [and] the camaraderie. It’s a fun industry — the best industry in the world.”
For more information, visit www.lakefrontbrewery.com.