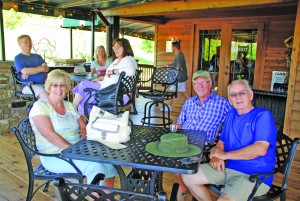 by Jane Primerano
Country stars never know how long their careers will last, even after they have lasted many years.
Kix Brooks had a 20-year successful career as half of Brooks and Dunn as well as a hit-studded solo career that continues, but he has a cushion for his wealth in the form of the successful Arrington Vineyards near Nashville, TN.
Leon Eric Brooks bought into the winery started by winemaker Kip Summers in its second year. The next year, businessman John Russell became the third partner.
Summers planted grapes on the former hog and cattle farm in 2004 and by the third year was harvesting them for wine. In 2007, they opened the winery.
Additional grapes are brought in from other parts of Tennessee, such as Kingsville, up in the mountains where the weather is cooler. Others come from California and Washington. The hills of central Tennessee proved to possess soil compatible with French white grapes and Chambourcin, according to Kayla Deprizio, tasting room manager. One grape that doesn’t grow at Arrington is the nearly ubiquitous Muscadine, she said. They do plant a Vidal Blanc, Deprizio said.
One of their most popular wines is Stagg’s, a white similar to Pinot Grigio. Many other of the wines are winners of state and national awards.
Deprizio said the winery has been growing over the past few years and now ships to every state that allows it. Arrington doesn’t take advantage of the new state law that allows them to charge for tasting, Deprizio said. She noted they can still only sell wine by the bottle, not the glass, under state law. Considering some counties in Tennessee are still dry, including the one where Jack Daniels is made, the winery management isn’t complaining.
The main building is the original farmhouse, which has been expanded over the years. Other buildings were added as necessary. A deck off the back of the farmhouse overlooks the vines. “Look out there,” said Aiden Coburn who retired to the hills of Tennessee after a career in California. “I’m from County Wicklow, Ireland, this looks just the same.” Coburn and his wife, Marie, toured the famous Napa Valley vineyards in northern California, but they enjoy Arrington’s ambience more. “We lived one and a half hours from Napa, but it was a different view,” Coburn said. The Coburns brought two other couples to Arrington.
John and Joan Keating are from Ireland. The other couple is from California and knows the Coburns from there. All had positive things to say about their visit.
There are two tasting rooms at Arrington, one upstairs and the other down, Deprizio said, plus the deck. The deck can be enclosed in winter and heated with a large stone fireplace, so it can be used year-round. Except for a slow season in January and February, the winery business is very steady. “We set up a tent in the picnic area for light tastings,” Deprizio said.
Also in the tent are Cigar Nights one Wednesday night a month. “A cigar shop in Franklin brings over cigars that go with our wines. It’s very popular with men,” she said, noting getting their husbands out of the house with their cigars is popular with women.
The biggest event of the season is the Harvest Party. It is a benefit for the Monroe Carell Jr. Children’s Hospital at Vanderbilt University, with entertainment, of course, by Kix Brooks. Arrington features jazz on Friday, Saturday and Sunday nights from May to December.
Deprizio said there are between 50 and 60 employees, mostly part-time.
The vineyard has one of the largest wine clubs in the nation, she noted, saying it has grown over the past few years. And, Arrington encourages picnics.
Arrington produces more than 18 different varieties of wine. The gift shop, which has been on site since the beginning, features gourmet cheeses, crackers, bottled water, wine glasses, cutting boards and cheese knives. A special treat is the black raspberry-wine truffles.