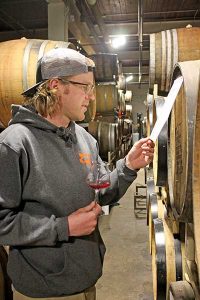 by Grey McAlister
Near the top of Munjoy Hill in Portland, Maine sits a brewery working in traditional Belgian-style ales with a bit of an American twist — Oxbow Blending and Bottling.
The brewery has two locations in which they work their magic. The farmhouse brewery located in nearby Newcastle and the location on Munjoy Hill where the brewery does their aging, blending and bottling. However, the brewery is not averse to collaborating with other breweries in the area.
On April 8, 2017, Oxbow was in collaboration with Allagash Brewing Company for Saison Day. This day, created by Allagash and in its fourth year, celebrates the art and taste of sour barrel-aged beer. It is to draw attention to sour beers, which have been gaining popularity in the U.S., and the various styles which fit into that category. The 2017 Saison Day was led by Allagash and Oxbow, since both breweries are better known for their sour beer styles.
Tim Adams, brewmaster of Oxbow, was the founder of this momentous collaboration. “This is a two-part collaboration,” Tim said. “[The wort] will rest overnight in our coolship. Allagash is continuing the fermentation and the blending over there.”
Allagash was the first brewery in Maine to have and have a coolship and use oak barrels. Oxbow was fast on their heels in getting their own and bringing wild yeast exposure to the forefront of the Maine craft beer scene.
“The most important ingredient is time,” Tim said. “Time is needed to achieve a slow fermentation.”
The Fourth Annual Saison Day featured a grisette, “Saison’s little sister,” said Tim. Although it is not a true sour, as it was fermented for a couple of months, it still met the requirements of a good sour. It was the released collaborated beer.
To make a true sour, fermentation must be painfully slow, sometimes taking two years of barrel aging before the beer is ready. “It needs to be dry, rustic and quenching,” said Tim.
The process Oxbow uses in producing their sour brews is kept as traditional as possible. Similar to winemaking, this beer can be new territory for other brewers. However, creating the wort is still the same. Instead of adding in strains of yeast, the wort is allowed to sit, being exposed to the air and whatever yeast may be in it. Then the beer is placed in stainless steel tanks or allowed to age in recycled oak barrels. Blending is also done.
“Blending is very important to saison,” Tim said, referencing the intricacies and complex flavors a single batch can have.
The brewery also delves into fast sours, which aren’t as complex. The grisette is an example of a fast sour, produced in a shorter amount of time but still developing similar characteristics needed to be called a sour. However, the final product is very consistent to previous batches made with the same formula.
There are positives and negatives to the slow aging process. Slow fermentation with wild yeast exposure limits the control the brewer may have over the finished product, leaving the same formula to develop different kinds of flavors when compared to each batch. And each spent day aging is another day of a barrel taking up valuable space and the brewer losing any type of profit from the brew. But the beer is worth the wait.
“Fans love the barrels,” Tim said. “The beers are better and there are more complex flavors.”
Although Oxbow is known for their sour beers, they are not limited just to them. They create a lot of different farmhouse ales — over 40 types. “It’s simple in what goes in, but it comes out much more complex,” Tim said. There are low malt and low hops varieties and some will feature classic Maine ingredients, such as blueberries.
A joy the brewery finds in creating outside of sour beers is with their pilsners. The beer is brewed in a similar style to a saison, but it uses lager yeast instead. It is also inspired by Italian Pilsners with the use of dry hops and finding a balance between control and just letting the beer go free and do what nature intends for it.
The collaboration with Allagash is not the first or only collaboration for Oxbow. Like many in the Portland craft beer scene, other breweries are seen as compatriots instead of competitors. Two such collaborations with Oxbow Brewing can be seen with Jester Kings Brewery and Birrificio Italiano, both of which brew wild yeast beer or pilsners, respectively.
Oxbow Blending and Bottling is at home is a large warehouse. In total, there are two dozen tanks of varying sizes and 150 oak barrels aging at any one time. Sharing the space is a small tasting room. The 2016 production saw just under 1,600 barrels brewed.
Oxbow and Allagash plan to collaborate again for the Fifth Annual Saison Day, bringing out their true saison Tim said needed to age for roughly one year.
“It’s all lovingly crafted and we’re excited for what’s next,” said Tim.
For more information, go to http://oxbowbeer.com .