Award-winning whiskey, wine and beer featured at the 2018 RI Women in Agriculture Conference 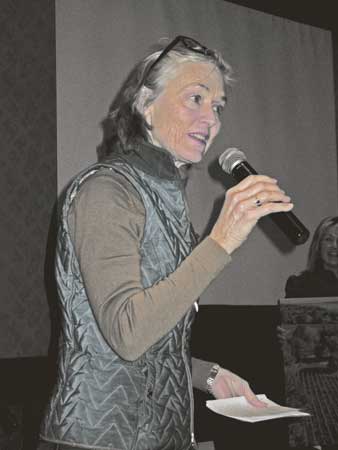 by Kristen M. Castrataro
On March 6, Rhode Island Women in Agriculture held their fifth biennial conference at the Crowne Plaza in Warwick, RI. The conference boasted 36 speakers and panelists including: state senators and representatives; the Director of the Rhode Island Department of Environmental Management; the Chief of the Division of Agriculture; representatives from USDA APHIS, FSA, NRCS; and the acting director of the Office of External Affairs for the Farm Service Agency, direct from Washington, D.C.
Among the farmers and businesspeople who shared their stories were Mike Repucci, Sons of Liberty; Nancy Parker Wilson, Greenvale Vineyards; and Wesley Staschke, Whaler’s Brewing.
Whiskey
Sons of Liberty opened in 2009. In its short history, the distillery has won 85 awards, including the Best Flavored Whiskey in America from the 2017 World Whiskies Awards. Awards aside, Sons of Liberty takes pride in being a truly Rhode Island company and seeks to partner with as many local farmers as possible.
Sons of Liberty’s New England Bourbon is a perfect example. It is the first 100 percent Rhode Island whiskey, made from corn grown, “milled, mashed, distilled and aged in the Ocean State.”
Sons of Liberty is comfortable testing boundaries, as is evident in their Pumpkin Spice Whiskey, a foray into seasonal whiskey. For the whiskey, Repucci sourced 32,000 pounds of pumpkins from a local farmer. A local processor opened up their facility at no cost for peeling, coring and roasting the pumpkins.
Of the local support Repucci said, “We have such an awesome, small-knit community.” To honor that community, Repucci is working on a special single malt that embodies the flavors of the Ocean State. He is experimenting with smoking whiskey through kelp and hopes to eventually create the best single malt in the world.
Wine
Nancy Parker Wilson’s ties to Greenvale Vineyards go all the way back to her great-great-great-uncle. Originally, they grew grapes for a neighboring winery. “And wow, the money was just flowing out the door,” recalled Wilson.
In 1990, Wilson’s father decided he needed help running the operation, and his daughter stepped in to assist. Decades later, Wilson’s son is also involved in the business. She notes that he “has the energy that I must have had 20 years ago.” That energy is critical to making changes to increase the farm’s overall sustainability.
It became clear that the grapes had to have added value, or they would not be profitable. Through the years, they shifted from growing for others to making their own wines to becoming a “destination.” Wilson says, “We survive on agritourism.”
Greenvale is currently home to 27 acres of grapes and a half-acre of hops.
Their efforts have paid off. Greenvale was recently named one of the “7 Awesome U.S. Wine Destinations That Aren’t Napa” by Food and Wine.
Beer
Wesley Staschke of Whaler’s Brewing would like to brew a more locally-produced beer, but a couple obstacles stand in his way. The first has to do with hops. While there are local farmers growing hops, Staschke’s equipment is designed for pelletized hops. Local farmers don’t offer them.
The second barrier is barley. The barley has to be malted by initiating germination to begin converting starches to sugars. The process then needs to be halted so there are adequate sugars for the yeast to convert to alcohol during the fermentation process.
One area where Staschke has developed local partnerships is disposal of the spent grain. After draining it, the mash is sent to three local farms to be used as livestock feed. At present, Whaler’s produces 2,500 pounds of mash a day. That amount is soon expected to increase by nearly five times, along with their beer production.
Staschke’s discussion of the malting process spawned comments and questions from farmers in the audience who had facilities that might be suitable for floor-malting and animals who might like a taste of spent grain.
In 2017, Whaler’s Brewing took home the Best Pale Ale in the United States at the World Beer Awards. Perhaps a future award waits for a Rhode Island-grown and -produced brew…with a little help from the cooperative industry that is Rhode Island Agriculture.