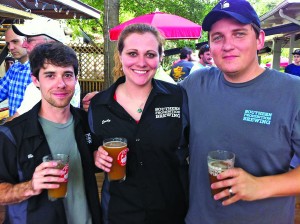 by Kelly Gates
What do you do when you’ve spent a full year barrel aging a brew, only to discover the end product is above the legal alcohol per volume limit? Southern Prohibition Brewing — aka “So Pro”— of Hattiesburg, MS has the answer.
The company recently experienced that very thing.
“When our brewers started making Barley Legal, the first in a series of barrel-aged brews, it went into the barrels at 9.5 percent, with a blend of rye and bourbon,” said Emily Curry, sales manager for Southern Prohibition Brewing. “When it was done aging and our guys were happy with the flavor, it tested at 11.4 percent alcohol. But here in Mississippi, the cap is 10.2 percent.”
According to Curry, missing the Mississippi mark was only somewhat disappointing. While Barley Legal couldn’t be sold in the brewery’s own state, it was a great fit for SoPro’s newly established Louisiana market.
Southern Prohibition’s head brewer Ben Green concurred.
“Unfortunately, we were unable to release the barrel-aged version of Barley Legal in Mississippi,” he said. “I would like to have shared it with everyone in state, but I’m sure Louisiana is happy. Hopefully we can show Mississippi some barrel-aged love soon.”
Green added that making something “forbidden” has its own appeal, one that plays perfectly into Southern Prohibition’s namesake and brand image. And, one that has attracted a lot of attention.
Barley Legal was one of the first brews created after Southern Prohibition was established in April 2013. Today, the company boasts a well rounded all year portfolio as well as an impressive collection of seasonal one offs.
“Making one offs keeps the consumer happy and trying new things,” Green noted. “And, it allows me to scratch the itch, so to speak. We have started a small barrel program and with our barrel-aged English barley wine, “Barley Legal,” we have several other offerings scheduled for fall and wintertime release this year.”
The brews released thus far by Southern Prohibition include Devil’s Harvest extra pale ale, Suzy B dirty blonde ale, Mississippi Fire Ant imperial red ale, an English ESB called “Jack the Sipper,” a Baltic porter dubbed “Ragana,” Barley Legal, a series of Cicada beverages in seasonal blends like Hipster Breakfast Oatmeal Stout and a dry hopped 2014 IPA.
“In April of 2013, we launched our first two brands, an EVB blonde ale and Extra Harvest pale ale,” said Curry. “Then, we added new brews continuously after that. We are the only brewer in the state that cans and it’s been fun seeing canned craft beers, plus the entire craft beer movement come into Mississippi.”
So Pro’s unique can packaging is so popular, the brewery even sells can-shaped drinking glasses with the same artwork that dons its Suzy B canned beers. T-shirts, hats, decals and other gift items are also available in the brewery’s gift shop, a routine stop for guests who come to sample, purchase and tour the facilities.
“It’s been exciting to see our company gain such a strong regional following. People in Mississippi like the fact that a craft brew comes in cans, but they also love and have become loyal to our brand because of the unique flavors we produce,” said Curry. “We’re hoping the state will change its beer laws in the future so we can focus on making the perfect brew, not the limiting alcohol content. These laws are stifling craft brewers, keeping us from creating what we want to create.”
People in New Orleans have benefited from the Mississippi cap. But the So Pro team wants its core customers to be able to enjoy every last one of its crafty creations too, she added.
While the one-of-a-kind flavor blends are enough to keep customers coming back, the packaging is equally appealing.
Barley Legal, for instance, comes in 22-ounce bombers that are hand-painted, hand-labeled and hand-stamped. The Barley Legal screenprint artwork was created by local artist Kyle Goddard and boast images of women with barley-decorated garters on their thighs and barrels around their bare bodies.
“We feel the quality of the can designs properly represent each beer,” said Green. “We’ve chosen 16-ounce cans for many of our products and 22-ounce bombers for our barrel aged beers.”
All of the company’s products are made in its downtown Hattiesburg microbrewery, a 20-barrel facility with four 40-barrel fermenters and a Wild Goose four-head canning line. This collection of equipment enables Southern Prohibition to produce upwards of 3,000 barrels (93,000 gallons, or 744,000 pints) per year.
Because Green and his staff are continually working on the next new brew, there is always something in production at the site. So Pro has also partnered with a number of local “watering holes” that feature its ales, lagers and other libations during special events, often with live music and special discounts on the company’s craft concoctions.
The next launch will likely be promoted at area bars, clubs and eateries in similar fashion.
“Our new beer on the horizon is called ‘Sinister Minister Black IPA,’” said Green. “It’s scheduled for a late August release. Then, we’ll be focusing on our winter releases.”
Long term plans for Southern Prohibition include strategically and steadily expanding into more cities throughout the state. The goal, said Curry, is to evolve into a southern regional brewery that Mississippi residents view as a strong, consistent part of the local culture.