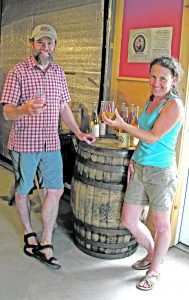 by Laura Rodley
Bear Swamp Orchard and Cidery is located in Ashfield, MA and July 1 was the perfect day to visit because it was the first day Bear Swamp Orchard was open for its seasonal hard cider tasting.
The tasting room is open every Saturday afternoon until early December. The orchard, owned by Steven Gougeon and Jennifer Williams, offers certified organic U-Pick apples during weekends in September to early October.
“We started managing the orchard in 2006. It started out just as a big hobby then it got out of control. We started making hard cider for ourselves and opened it up to friends,” said Gougeon.
They obtained a license to sell hard cider in 2012. The majority of the fruit is made into hard cider.
They currently grow seven acres of apples on a 25-acre farm at an elevation of 1,600 feet. When they started, they had six varieties and now have 70. They plan to plant a couple hundred of hard cider specific trees next year. They are finalizing decisions about their plantings.
Bear Swamp Orchard plants what Gougeon calls “found fruit,” which are seedlings found locally.
“When you take an apple and cut it in half, there are five seeds,” Gougeon explained. If you grew a tree from each seed “every one of those trees does not breed true to its parent… The only way to get a (matching) apple variety is to clone it.”
Gougeon and Williams produce a traditional hard cider much like the hard cider found in Britain, Spain and Austria, which has a specific outcome like with wine, he notes. Gougeon has studied the making of cider worldwide. In the north of Spain, Spaniards drink more cider per capita than anywhere else in the world, he noted, referring to Asturia which is found along Spain’s northern coast.
While the present-day apple economy is based on eating fresh apples year-round, made possible due to refrigeration, the art of turning apples into cider began due to necessity. Before refrigeration, apples were stored in fruit cellars and in barrels but ran the very real risk of becoming wormy or rotten. “In the early 1900s, the way to preserve the fruit was to turn it into vinegar, apple cider or apple brandy,” said Gougeon.
Making brandy requires a still. In his corner of Ashfield, MA alone, there were two stills on the tax records in the 1800s, according to Gougeon. The neighbors would bring their cider to the still to have it processed into brandy. According to a historical record on the Ashfield’s town website, by 1821 Ashfield had five distilleries on its tax records.
Gougeon and Williams are in the process of completing the paperwork and creating another room to open a distillery to make their own brandy. They just purchased a start-up still and they hope to open the distillery next winter.
Gougeon built the building where they house their nine fermenters, barrels and presses. Powered by a 20-panel solar system. “It produces all its own energy for the lights, the water pumps and presses.
“It’s super-insulated,” he said.
Always experimenting, they had test batches of cider made with elderberries and a pear cider fermenting on the counter.
They offer three varieties of hard cider. “The Farmhouse cider is made with cider variety apples fermented and aged in the way farmers used 200 years ago, producing a wine-like cider with a balance of tannins, acid and fruit,” he said.
They grow Golding and Cascade hops on a very small scale for their Hopped Hard Cider, just enough for their needs. This cider “is very bright, very brisk, not sweet, really good on a cold day” with a hint of the hops and herbal aromatics.
The New England style has raisins and brown sugar added to it and allowed six to eight months to age, as it takes on a hint of the barrels’ flavor of molasses and tannin. It has a 12 percent ABV and is made with cider specific apples such as Dandeneau (an unknown variety found in an old abandoned orchard according to the Bear Swamp website) Howes and Golden Russet.
Hard cider is made along the same lines as wine, he noted. “It has more of a body structure compared to a wine than to a brewed beer, has almost nothing to do with beer. But beer people tend to be more open than wine people. The wine crowd tends to be more insular.” They sell cider at a lot of beer events and served their hard cider at Berkshire East’s Franklin County on Tap in Charlemont, MA on July 22. They will also sell at the 23rd Annual Franklin County Cider Days in November, the oldest cider event in the country where there will also be European cider makers.
For more information visit bearswamporchard.com .