Bedient Farms specializes in grapes for wine and juice markets 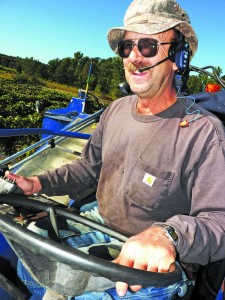 by Jon M. Casey
As Jim Bedient tended to his vines on Bedient Farms near Branchport, NY, he shared some of the farm’s history, a period covering nearly 50 years.
“My dad, Vincent, who is now 84 years old, started as a logger back in the 1950s,” said Jim. “During the harvest season, he would take the logging equipment off his truck and rig it to haul grapes for the local grape growers. They produced grapes for Welch’s, out in Westfield, NY. Back then, the grapes were all handpicked and put into 40-pound boxes. The boxes went onto the truck one at a time, and then off to the processing plant where they were hand-dumped and brought back to the farms to be refilled once again. That started around 1958, so he became familiar with the grape growing industry in that way.”
“In the 1960s he had a logging accident, which was quite common back then, and he realized that farming and grape growing might be a better way to earn a living. He bought the original farm in 1966. At the time, the farm consisted of 20 acres of grapes, which was about as big as a farm would be since there were no mechanical harvesters at that time to do the work. All the work was done by hand labor, usually local housewives and young people from the area. Back then, no one had more help or time to pick more than 20 acres. Today, we have 105 acres of grapes and employ two people full time.”
Second Generation
In 1996, Jim became the primary operator of the farm, while Vince continued to farm the operation as well. Even now, with Vince “retired,” Jim said Vince still helps around the farm every day. “Some days he sleeps in — until 7 or 7:30,” he said tongue-in-cheek. “He does things like mowing, snow removal, operates the fork lift during harvest and other needed tasks. He also tends to an acre of grapes at the bottom of the hill. That is his own plot of vines.”
Jim said the only other family members that are involved on the farm are those who help out infrequently when needed, like his brother-in-law Rusty Perry or his father-in-law Jerry Scott. Jim said his wife Kim recently retired from public school teaching and is not regularly involved in the farming operation. Their older daughter Amy will graduate from medical school this year, and hopes to be a primary care physician, serving her residency in northern Pennsylvania. Their younger daughter Holly is in the “horse business” where she is a trainer and coaches the equestrian team at Keuka College, a local college in the Finger Lakes region of New York.
“When we first started growing grapes, we were growing them for the Taylor Wine Company in Hammondsport, NY and business was good,” he said. “When the Taylor family sold the company to a large beverage company, the company moved much of the operation to California and their purchase of grapes from the local area diminished. From there, the company sold again. The new owner went broke and closed the doors. That business was closed for some time so over the last 15 years, we have gone on to sell to smaller wineries in several states. We sell juice to wineries in Nebraska, Iowa and South Dakota as well as others here in the east like one in New Hampshire and another large one in Pennsylvania.”
Bedient said that as the market demands have changed, he has planted various varieties for his customers that now can be found in more than a dozen states. “We have 45 acres of juice grapes that go to Welch’s,” he said. “They go for both purple and white grape juice. The other 60 acres [grow] about 10 different varieties of grapes, for sale to wineries throughout the U.S.”
He has an arrangement with a local juice press operation that prepares his juice for shipment to the wineries. “Last year, we sold over 60 tons of grapes to Chaddsford Winery in southeastern Pennsylvania,” he said.
Jim said he also has grows some Riesling grapes and other varieties. “I’m growing some of the newer Cornell varieties of grapes. I’ve been growing Traminette for more than 20 years and I planted Noiret grapes about 10 years ago. I planted that variety before it was named. That is a big selling wine in the Northeast.”
U-Pick blueberries
“We also have two acres of U-Pick blueberries that have become a tradition in our area over time,” he said. “About 30 years ago, I had a couple of rows of strawberries in my garden. Before long, I had more strawberries than I could use. So I started selling them locally and decided to plant an acre of strawberries. I started a U-Pick strawberry business, but over time it got harder to manage that and take care of the vineyard as well.”
“So we planted an acre and a half of blueberries, and we sold more blueberries than strawberries. We continued with the blueberries and stopped selling the strawberries. They sell themselves, and we use a lot of the same equipment and plant care items that we do for the grapes.”
Just the same, growing grapes is Jim’s first love. “There is nothing quite like being an upstate New York grape producer. I’ve always said the one nice thing about being in the grape growing business is that you are always doing something different every day,” he said. “There’s never a lot of down time. You can always be doing something, whether it is pruning or spraying or tending to the rows.”