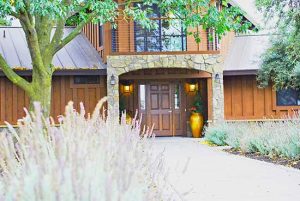 SANTA ROSA, CA — Benovia Winery is pleased to announce that winery co-founder and owner Mary Dewane has been appointed general manager. Dewane co-founded the small production, family-owned winery in the heart of the Russian River Valley with her husband, Joe Anderson, in 2005. Benovia is best-known for its expressive, estate-produced Pinot Noir and bright, complex Chardonnay.
Benovia’s allocation list has grown remarkably, necessitating the need for increased management and administration at the winery. Dewane was chosen by Benovia’s board of directors because of her experience as a CEO earlier in her career, her background in farming, and her role as a hands-on owner.
“Thanks to our talented winemaker, Mike Sullivan, and the beautiful Pinot Noir he has crafted, our allocation list has grown significantly. I’m really excited to partner with him,” said Dewane. “I feel that my experience as a CEO will serve me well in my new role as general manager at Benovia. I’ve always believed in hiring exceptional people and giving them the support, direction and resources they need to excel.”
Dewane grew up on a dairy farm in Wisconsin and was raised with a keen understanding of her family’s agricultural business. Before co-founding Benovia, she was the CEO of CalOptima, a $1.5 billion per year health plan and one of the largest Medicaid managed care organizations in the country. Dewane was responsible for the creation and administration of all operations, finances and medical management. She hired and managed a staff of 225 people. A tribute to her pivotal work in Orange County, CalOptima now gives the Mary K. Dewane Award annually to organizations in Orange County that enhance access to quality health care for vulnerable populations. Before they left their careers in healthcare, Dewane and Anderson worked several harvests in Sonoma before acquiring Cohn Vineyard in 2002 and establishing Benovia Winery in 2005.
Located just east of the famed Russian River, Benovia produces some of the region’s most expressive Pinot Noir — grown on 72 acres of estate vineyards, owned and sustainably-farmed by the Benovia team. Benovia is popular with savvy, adventurous Pinot Noir enthusiasts who vie for its limited production single vineyard wines.
As co-founder and owner of Benovia Winery with her husband, Joe Anderson, Mary Dewane

For more information please visit www.BenoviaWinery.com .
About Benovia Winery
Benovia Winery is a special, small production, family-owned winery in the heart of the Russian River Valley that specializes in sustainably farmed, single-vineyard Pinot Noir and Chardonnay. Founded by husband and wife team Mary Dewane and Joe Anderson, Benovia was named after Mary and Joe’s fathers, Ben Dewane and Novian Anderson. Similarly, the family’s Martaella vineyard is a tribute to Dewane and Anderson’s mothers, Martha and Eleanor. Benovia owns and farms three distinctly different vineyards so as to present several nuanced wines in its portfolio. The wines are allocated directly to customers and distributed to select restaurants across the country.