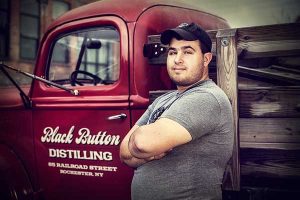 by Karl H. Kazaks
Jason Barrett reached out for a dream — a dream founded on a memory — and transformed that dream into reality: Black Button Distilling, based in Rochester, NY. The distillery was recently named one of the 10 best craft distilleries in the country in a USA Today readers’ poll.
A few years ago, Barrett was living in the Washington, D.C., area, working a job he didn’t like, practicing homebrewing, and noticing craft distilleries cropping up in the northern Virginia area and around the country.
Bourbon was his “drink of choice,” a habit he developed from watching his grandfather make and enjoy bourbon Manhattans. “Whether it’s hot or cold outside,” Barrett said, “I love a Manhattan.”
One of those nights after work, with a Manhattan in hand, Barrett dreamed of opening his own distillery.
“If I quit my job and sold my house,” he recalls thinking, “this just might work. Before you know it, a year later that was what I was doing.”
Barrett moved back to his hometown of Rochester, where his family has operated a button manufacturing business since the 1920s. He found a location for his distillery, a 5,000-square-foot-space near Rochester’s Public Market, and named the operation after the family business.
The first year-and-a-half Barrett lived in his parent’s guest room. “It was definitely a shock to leave my own career and house and move back in with my parents,” he said. “But I needed to do it to make the business a success.”
Today Barrett is living on his own, and Black Button has attained a level of success beyond even Barrett’s dreams.
Black Button’s spirits are distributed in 15 states, and the distillery employs about two dozen people, including a number of bartenders who help operate the tasting room, Production Distiller Jeff Fairbrother, and Barrett’s father Dick, a retired engineer whose title at Black Button is Whiskey Engineer.
Black Button specializes in making spirits strictly from grain grown in western New York. They contract with a grower for their corn, wheat and rye, and get their malted barley from a malt house in Rochester.
At the heart of the operation is a 300-gallon hybrid still from Artisan Still Design. Barrett has had some modifications done to it, such as increasing the pressure in the dephlegmators. The rest of the equipment came from Custom Metalcraft.
As the business has grown, Barrett has had to look for more space. “We’re out of floor space, which is a good problem to have,” he said. “We’ve gotten really good at 3-D Tetris.” Next year, the operation will add a second, stripping still. Barrett also signed a lease on a place to use as a barrelhouse.
Barrett says the tasting room has helped drive the growth of the distillery. “We use it as a way of telling people what we’re doing and showcasing new products.” On a busy weekend day, some 300 people can visit the distillery.
Black Button’s products include Four Grain Bourbon, Citrus Forward Gin, a mostly wheat vodka, Black Button Moonshine, and Apple Pie Moonshine (made with cider produced in western New York). During the initial months of the distillery’s operation, the bourbon was first made in five gallon speed barrels, aged for four months, while the bourbon in 30 gallon barrels was left to age for two years.
Being a bourbon lover, Barrett couldn’t help wanting to know how the whiskey in the bigger barrels was progressing. “We had to come to an agreement that we would only taste it once a month,” Barrett says, laughing.
The bourbon is typically a blend of six to eight barrels. The key, for Barrett, is consistency of flavor.
“Two barrels of the same size, filled the same day, with the same juice, six months later – a year later – they can taste very, very different.”
Most of the barrels at Black Button are made from Minnesota white oak, from Black Swan Barrels. But Barrett is also experimenting with New York white oak barrels, which have tighter grain than those from Minnesota.
“It’s a little more like French oak,” he said.
Last year, Barrett started using 53 gallon barrels, which he will age for four years.
In addition to their mainstay products — especially bourbon and gin — Black Button also makes a number of small-batch products, like Lilac Gin and Bespoke Bourbon Cream.
They also recently re-crafted their vodka, introducing a new product, 20 Plate Vodka. A blend of 80 percent wheat and 20 percent barley, 20 Plate is distilled through Black Button’s four-plate whiskey column, then re-run through their 16-plate vodka column.
As the business has grown, Barrett has stayed true to his commitment to make all of his own product, with ingredients from western New York, resisting the opportunity to outsource production to meet demand.
“We make every drop right here,” he said.
That ethic, and the passion to create the best possible product to allow consumers to create their own memories, is what underlies Barrett’s and Black Button’s motto: “Live large in small batches.”