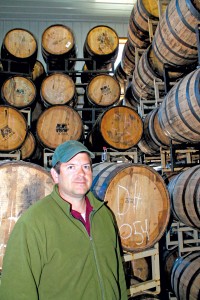 by Karl H. Kazaks
ARRINGTON, VA — About 10 years ago, Taylor Smack was the head brewer at South Street Brewery, a Siebel Institute graduate with previous head brewer experience at Goose Island’s brewpubs, Smack was interested in expanding South Street’s operations. He found a 15-acre parcel of land west of Charlottesville he believed would be the perfect place for his current employer to build a larger production facility. The owners of South Street decided not to expand and soon thereafter, Smack, with his wife Mandi and a partner, Matt Nucci, opened their own craft brewery and brewpub called Blue Mountain Brewery, the year was 2007. Smack didn’t forget about that spot in the southern part of the county and in 2012, he purchased the 15-acre parcel and opened Blue Mountain Barrel House. Two years later, he bought South Street Brewery and today the Blue Mountain Barrel House produces beer for South Street – just as Smack had envisioned a decade before.
Blue Mountain is distributed in the mid-Atlantic region from New Jersey to North Carolina, South Street is sold solely in Virginia. Last year Smack oversaw the production of about 8,800 barrels of beer. This year, with the addition of the South Street line, Smack expects to produce between 11,000 and 12,000 barrels of beer. At present, the Barrel House includes fermenters and brite tanks of a various sizes. To prepare for the additional production, Smack is replacing some of the smaller fermenters with four new 120-barrel fermenters from Craftwerk. Catwalks will also be installed this year to make it easier to work with the larger tanks. Also planned for the year are a new bottling line, a new forklift and a new effluent treatment system.
The barrel house was designed to allow for parti-gyle brewing. One of Smack’s goals when he first built the new facility was to increase his barrel aging program. The beers that are barrel aged tend to be higher-alcohol, like the popular Dark Hollow, a low-roast imperial stout that measures 10% abv, and Mandolin, a 9 percent triple-style ale. Smack wanted to be able to continue to grow production of those stronger beers while not sacrificing the potential of the grain – hence the decision to design the brewery to be able to drain off the mash into two separate kettles. Installed by Premier Stainless, it has a 30-gallon mash tun and two 15-gallon kettles. What makes Smack’s system unique is that the brewer can go back and forth between each kettle during production, rather than filling one first and then moving to another. Even though Blue Mountain does have a robust barrel aging program, today the production of non-aged beer far outweighs the production of beer destined for barrels. Still, having the split design has some other advantages. For example, Smack uses the split setup to hop one batch of beer with two different hops (a different hop in each kettle).  ìIt provides better complexity,î Smack said.
One of the attractions at both the Barrel House and the brewpub are hop vines (Cascade). Despite being in humid Virginia,”We’ve never had downy mildew” Smack said. That may be because the vines grow on open sites with plenty of wind. With the hopyard, drainage system, hop drying building and the Barrel House itself, much of the parcel of land here in Arrington is already utilized. But there’s still space for one more building. As production continues to grow, a separate filtering and packaging facility could be built, leaving the original Barrel House just for brewing beer. It’s all part of a career progression that has made Smack into one of Virginia’s most influential brewers. But the success came with plenty of preparation. ìI took the nice slow road and learned from others.î That’s advice younger brewers might consider. Especially when you realize, as Smack’s example shows, that sometimes it takes a little while to realize your vision. But things do have a habit of coming full circle. Blue Mountain’s original brewpub produces about 2,500 barrels per year and is a successful destination. With the addition of South Street, Smack and Mandi (who is in charge of finances as well as the restaurants) would consider opening another South Street brewpub.