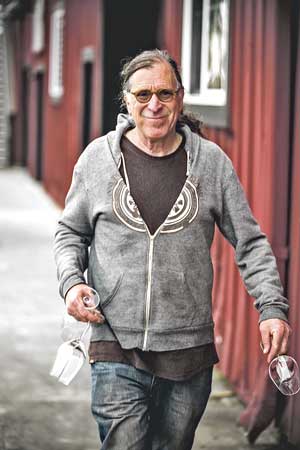 by Laura Rodley
Remember the television series The Lone Ranger? In 1989, the writers of Wine Spectator asked Randall Grahm, owner of Bonny Doon Vineyard in Santa Cruz, CA to appear on their cover dressed as the Rhône Ranger, as the champion of Rhône varieties of grapes in that region for his wine.
“I was asked to do this, as well as to bring my own horse. The wine bottles in the holster was my idea, however,” said Grahm.
Another flashback to that era is an obsession with UFOs. The fascination and belief in UFOs was so prevalent, that over in southeastern France a decree was drawn up by the Chateauneuf-du Pape village council in 1954 prohibiting the landing of cigar shaped alien spacecraft in their surrounding appellation of vineyards, the Appellation d’origine contrôlee (AOC), one of the most renowned vineyards in the Rhône valley. Nor could they fly over their AOC. This was after an alleged sighting of not a flying saucer, but a cigar shaped UFO.
Nonetheless, this unique law caught Grahm’s sharp attention. A graduate of UC Davis in plant sciences in 1979, he started Bonny Doon in 1981. After his own odyssey of discovering and growing different varieties of grapes, including the Rhône grapes that he planted in the Santa Cruz Mountains, in 1986 he released his inaugural wine (1984) Le Cigare Volant (flying cigar) with a nod to the Chateauneuf-du Pape AOC.
“When you’re attempting to sell wine in a category that few people in this country have heard of, you are compelled to take whatever measures are necessary to succeed. In this instance, I attempted to use humor as a door-opener, to disarm people’s fears, and to begin a conversation. ‘Why is there a spaceship on the label?’” he said.
Ever innovative, in April 2018 they announced their inaugural release of their 2017 La Bulle-Moose de Cigare, a fizzy pink wine in a can, the first wine that they have so packaged. It is carbonated, meaning its effervescence does not derive from a secondary fermentation in the bottle. It is not made from Chardonnay, Pinot Noir and Pinot Meunier grapes. Rather, it is made with Grenache Noir, Grenache Blanc, Mourvèdre, Roussanne, Carignane and Cinsaut grapes.
There are an astounding variety of grapes from which to choose. “I have heard varied numbers thrown around, but it appears that there is somewhere between 5,000 and 10,000 vinifera (European) grape varieties, approximately 1,000 of which are named or are of commercial importance. There are other species of grapes as well, capable of producing wine, and also used for table fruit or for root-stock,” said Grahm.
Their first production run of La Bulle-Moose of 5,500 cases is already in national distribution. “We also look toward exploring export to Canada as we have a very healthy business there with the Bonny Doon wines,” said Grahm.
Besides Bonny Doon, Grahm purchased a 400-acre vineyard in San Juan Bautista, CA, called Popelouchum, which translates to paradise, so called due to its uniqueness of climate and soil types. “RG owns the Popelouchum Vineyard and its wines are produced by Bonny Doon Vineyard. At the moment, there has not yet been a commercial release of wine from Popelouchum; Randall is inclined toward releasing the Popelouchum wines as a separate and unique brand from Bonny Doon,” said spokesperson Barbara Smith.
“The wines from Popelouchum are a few years away, alas,” said Grahm.
What pests are encountered in the vineyards and what methods are used to combat them, and keep them under control? The biggest pests at the Popelouchum vineyard are vertebrates — gophers, ground squirrels, coyotes and, of course, birds.
“In addition to Randall, in the vineyards we have a vineyard manager, a vineyard foreman and two part-time employees,” said Smith. This does not include harvest crews. In the tasting room, open daily year-round, there is a manager, assistant manager and six part-time tasting room sales associates. Another person tends the organic farm garden. The produce from it is used for wine tasting events.
Their national distribution team distributes their wine, currently at production volume of 40,000 cases a year. They will be coming out with a red wine and a white wine this summer.
What is Grahm’s secret of success? “I honestly haven’t thought about it, but possibly it may have to do with a strange ability to look at things from a different perspective that other people had not considered, i.e. why not try to make wine from Rhône varieties in California? This coupled with a fair bit of luck, [such as] being in the right place at the right time (Big House) with a dash of marketing creativity has seemed to help. Lastly, there’s the question of sheer persistence…but at the same time, that may also be my tragic flaw.” Along with Cardinal Zin and Pacific Rim, Big House was one of his extremely popular brands that he has since sold to allow him to remain an explorer of soulful wine invention, close to his vineyards.
Grahm has gained legendary status for his interest in the expression of terroir in wine. “Wines of terroir, or ‘wines of place’ are the only ones that really matter as far as their complex singularity. In that sense, they are irreplaceable, like the existence of a rare bird or butterfly; they offer an interesting and important lens into Nature itself. The fact that they carry a strong imprint of the soil/site from which they derive also will typically impart a certain sort of persistence on the palate. This is the so-called ‘minerality’ that people recognize but for which no mechanism is understood. Personally, I am inspired by vins de terroir; as winemakers they compel us into a form of humility, whereby we understand that we are merely custodians of something that is much larger than ourselves. We are there to serve the unique genius of the site, to elicit its true personality.”