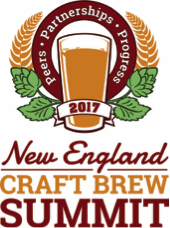 Watson and Marisic bring national voice on brewing industry to Maine
PORTLAND, Maine (February 27, 2017) – Bart Watson, Ph.D. and Katie Marisic of the Brewers Association will deliver a keynote address focused on growth in the brewing industry at the second annual New England Craft Brew Summit on March 31, 2017 at the University of Southern Maine in Portland.
Bart Watson, Ph.D. is the chief economist at the Brewers Association, where he leads economic analysis, market research and industry forecasting. Known to be the authoritative voice on the craft beer industry, Watson regularly appears in national media discussing his insights and weighing in on industry news and trends.
Katie Marisic is federal affairs manager at the Brewers Association and based in Washington, D.C. where she acts as the Brewers Association’s presence on Capitol Hill to plan legislative, regulatory, and political strategies to support the brewing industry. She is currently involved in the Craft Beverage Modernization & Tax Reform Act, as well as promoting USDA research on hops production.
“Whether a brewer is choosing to remain small and cater to a local customer base, or ship their beer to a distant market, they will benefit from the national perspective that these speakers will bring,” said Sean Sullivan, executive director of the Maine Brewers’ Guild.
Watson and Marisic will be joined at the full-day conference by several nationally recognized speakers, including Ginger Johnson of Women Enjoying Beer, Laura Lodge, author of “Distribution Insight for the Craft Brewer,” and Matt Stinchfield, safety ambassador at the Brewers Association.
Presented by Bernstein Shur, the New England Craft Brew Summit will feature live talks and panel discussions from brewers and owners, blended with practical advice from professional service providers on a wide range of topics currently impacting the craft brew industry.