Brewing kombucha for the love of it 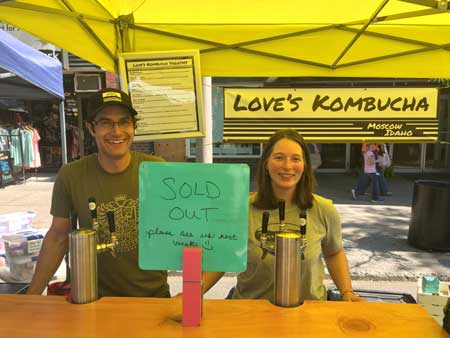 by Catie Joyce-Bulay
Many people that visit Love’s Kombucha’s stand at the Moscow, Idaho farmers market don’t know what kombucha is. “That’s why it’s so much fun,” said Renee Love, who brews and owns the business with her husband, Emmett. “We have a lot of people that will come up and bring their friends and say ‘My friend is making me try it but I know I don’t like kombucha.’ And we say, ‘Well, you haven’t tried ours yet.’” Many come away with a new appreciation for the fermented probiotic tea.
The Loves, who have been brewing kombucha for seven years, started the brewery at the beginning of last year’s farmers market season and have been surprised by the growth and positive response in the little town. “I love the farmers market. That’s part of the reason I started this — I really like being connected with the community and I really love Moscow,” said Love.
Renee and Emmett both grew up in Spokane, WA and moved to Moscow, where Renee attended the University of Idaho. After school, they moved to Houston, Texas, where a friend introduced them to kombucha for the first time. They liked it so much their friend gave them a SCOBY so they could start brewing their own.
A SCOBY, or symbiotic culture of bacteria and yeast, is the mother organism needed to make kombucha. After a couple weeks sitting in a jar with the SCOBY, the tea and sugar mixture ferments into a light sparkling beverage.
The Loves began making several gallon batches in their home kitchen in Texas and soon began trading with friends. “One of my friends would go down to the Houston farmers market and get me farm-fresh eggs and another one had a work rotation in Russia and she’d get me chocolate,” recalled Love. “That was a really fun way to do it. People really liked our kombucha and so we just continued from there.”
The Loves moved back to Moscow in 2016, where Renee teaches geology and international student classes at the University of Idaho and Emmett is a contractor. They bought a three-acre farm, maintained a small garden and berry patches, and Emmett began selling vegetables at farmers markets.
“We thought that kombucha would be a really good add to what we’re offering, but kombucha kind of took over as we were getting a handle on [the garden],” she said. “Now kombucha is the main thing we do with farming on the side. Eventually we’d like to do both.”
After the farmers market season ended, the Loves began approaching restaurants and grocery stores to ask if they wanted to offer their kombucha on tap. Now they are in about 14 locations, including Moscow restaurants, regional Growler Guys, and grocers in Western Idaho and Eastern Washington.
They offer about 10 flavors and Love said she is looking forward to classes ending for the summer to have more time to experiment with different teas and herbs. Each tea they brew with gets a different SCOBY, which is uncommon among commercial kombucha brewers, who typically brew with black tea from a single SCOBY and then add flavoring with fruit juices during a second fermentation.
“Another reason why we started brewing our own kombucha and selling it is I didn’t like a lot of the juicy kombuchas that you find in the store,” said Love. “Kombucha at its essence is just tea — a fermented tea. From brewing our own we knew how good it could be just on its own, first fermentation, without adding any juices. So that’s our main focus for the kombucha.”
They brew weekly in small seven- to 25-gallon batches, with a variety of teas they order online, including black, Earl Grey, white, rooibos, yerba matte, pu-erh, oolong and green jasmine. In the summer, they offer a berry flavor by infusing whole berries they grow on the farm.
“Brewing kombucha is almost like growing a carrot,” said Love. “Every carrot you grow is different tasting and it’s the same thing with those different kombucha batches.” They do try to keep the product consistent by removing pieces of the SCOBY to keep it fresh. Love said that their chickens love the discarded SCOBY pieces, as well as one of their dogs. “The other one looks offended when we try to give it to him,” she said of the SCOBY.
Kombucha comes with many purported health benefits, though there is little research to back it up. Love said she shies away from speaking of the health benefits since it isn’t her area of expertise but will tell customers about what she has personally experienced.
“One thing I can say is the reason that I kept drinking it is that it’s really helped my digestion and it gives me a lot of energy,” she said. “I think that comes from the amino acids and B vitamins.”
The Loves aren’t sure what the future will have in store for the business. “We’re just playing it by ear right now. We’ve been really impressed so far with how far we’ve gotten since last May,” she said, adding it is important to the couple to find a good work-life balance. “We just love kombucha — we make it because we love it.”