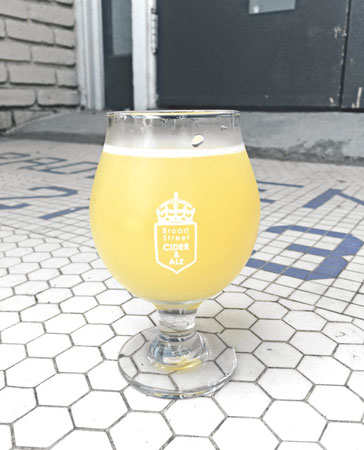 by Enrico Villamaino III
Years of academic study and worldwide travel have led a West Coast couple to an unexpected place and occupation: proprietors of New Orleans’ only cidery.
Natives of southern California, Jon Moore and Diana Powell relocated to the Crescent City in 2010. “I was beginning my Ph.D. program in history at Tulane University,” Moore explained. “I was studying the history of the British Empire, and that gave us a reason to travel. I conducted my research and along the way we had the opportunity to sample craft beer and cider from all over the world. Our travels took us to England, France, New Zealand and Australia, among other interesting and exciting places. We met so many people around the world making amazing cider and beer and bringing their passion to others.”
After completing his doctoral dissertation, Moore began teaching history at several local universities – Tulane, Loyola and Xavier. While he was pleased with these opportunities, Moore said that he and his wife Powell had a “What do you want to do with your life?” moment.
“We remembered our trip to Australia, and Diana had asked the owner why she started her own brewery,” Moore said. “She told us that she enjoyed beer and wanted to find a way to make that her job. That really resonated with us. We love drinking cider and beer in bars and taprooms and talking about craft beverages with everyone. This is why we created Broad Street Cider & Ale.”
Moore explained that they focused on cider rather than beer because of the city they now call home. “There were no other cideries in Orleans Parish. Even now, we’re the only one, so there was a lot of opportunity in being the first cidery in town,” he said. The other reason was the resources they had at their disposal. “New Orleans is great,” Moore mused with a smile that turned into a smirk, adding, “New Orleans’ water is not. Given what we had to work with, we decided it was best for us to focus on cider rather than beer.”
Broad Street Cider & Ale technically opened in July 2017 with an official grand opening on Sept. 22, 2017. “Doctor Jon,” as he is known around the establishment, produces his ciders in five gallon batches. At any given time, there are at least 12 ciders on the menu – five standards, five “one-offs,” and two guest ciders. To date, Broad Street has offered over 50 different ciders to its patrons.
Moore said, “We get our juice primarily from a family farm in Michigan. Their Macintosh juice forms the base of the majority of our ciders. They also press pears for our perry and we use their cherry juice in our Ruby Jubilee.
“We focus on making flavor forward ciders using different yeast strains,” Moore continued. “Yeast is the not-so-talked-about secret ingredient that often imparts the most flavor in fermented beverages like cider. Using beer, wine or cider yeasts allows us to make a broad range of delicious ciders. With this base we then add different ingredients, like Earl Grey tea in our Duchess of Devonshire or dry hopping in our Hyde Park, which highlight the range of crisp refreshing flavor profiles you can have in dry cider.”
They are also looking to more mead and wine selections as the business moves forward. As for the “Ale” in Broad Street Cider & Ale? “While we are technically a winery, not a brewery, and are therefore unable to produce our own beer, we have secured a retail license to sell others’ craft beers on site,” Moore said.
The business has enjoyed a healthy amount of growth since its opening, but Moore is quick to point out that the business is “as big as we want to be – no expansion plans for us.” Moore and Powell currently utilize a staff of three to four employees. “We like hiring teachers,” Moore stated. “A large part of serving cider in a town with one cidery is taking the time to explain our products and give little tutorials on cider. Teachers are great at that.”
Broad Street celebrated its official one year anniversary with its “Most Exciderating Day Celebration” which featured new cider offerings and festivities. He is looking into arranging for partnerships with local food trucks in the area to host “pairing nights,” matching Broad Street’s ciders with some of the local cuisine. And, of course, what autumn season would be complete without hot apple cider?
The future is full of possibilities for Broad Street, according to Moore. “We are really looking forward to what’s ahead,” he said.