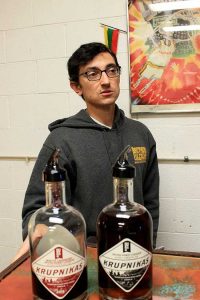 by Karl H. Kazaks
DURHAM, NC — “Krupnikas is what started everything,” said Rim Vilgalys, owner and operator of Brothers Vilgalys Spirits.
A traditional spiced honey liqueur from Lithuania and Poland, Krupnikas is particularly popular in those cultures around the holidays. Rim’s father would make it at home in the kitchen, having learned how to make it from his father, who was born in Lithuania.
Eventually, Rim started making Krupnikas himself, sharing it with friends.
Before long, Rim recalls, “people were knocking down doors. I was getting emails from people I didn’t know.” It was then he realized what he thought would always only be a small-scale hobby could be a full-fledged business.
So Rim took a business class, and in 2012 founded the business. At first, it seemed his brothers might help him in the operation, so they named the operation Brothers Vilgalys Spirits.
Today, the brothers have moved on to other endeavors, leaving Rim to run the business with the help of Operations Manager Michelle Koch.
Vilgalys makes Krupnikas by cooking whole spices and wildflower honey in a Stilldragon kettle and blending it into grain neutral spirits. The production facility in downtown Durham is permeated with a pleasant smell of honey and spices, even on days when there is no production.
Brothers Vilgalys Krupnikas is found in 10 states from Georgia to Massachusetts. Vilgalys is planning on expanding into New York and Florida this year as well.
“I’m redrafting my business plan this year, too,” he said. “I’m looking to hire more people.”
When choosing a wholesaler to market his product, Vilgalys looks at the other brands a company has represented. The idea is to work with companies which have successfully promoted other producers in the craft distillery industry.
Vilgalys attributes the popularity of his Krupnikas to his decision to use whole spices and wildflower honey, which impart better taste to the finished product.
The Krupnikas does have rich and complex flavors, with a substantial mouthfeel and a prominent spice quality on the finish.
“It’s strong enough it can be the base of cocktails,” Vilgalys said.
In addition to the classic Krupnikas, Vilgalys also makes a cranberry version, which has a pleasant tart taste and an elevated acidity.
In 2015, Vilgalys also released four other products — liqueurs made from a mixture of exotic ingredients. Zaphod is made with starfruit, guava, mint, sage, lemongrass and peppercorns. It has an aromatic quality and is mellow on the palate.
Beebop is made with rhubarb, hibiscus, rosemary, allspice, coriander and chamomile. Tart and savory, it has a dry finish. Beatnik is made with beets, thyme, rosemary, sage, fennel and orange zest.
Jabberwock, said Vilgalys, “is for spicy food people.” It’s made with coffee, chicory, manzaon and chipotle peppers, lemongrass and eucalyptus.
“All of our products are weird and different,” Vilgalys said. “The difficulty is people don’t know what it tastes like. They say, ‘I saw it on the shelf but didn’t know what it was.’ The advantage is we are different, so we can stand out.” The key is to get people to try the product.”
To that end, Vilgalys travels regularly to markets up and down the east coast, meeting with bartenders and beverage managers.
“I do a lot of consumer tastings and visit businesses, restaurants,” he said. “It’s fundamentally, give out samples, give out samples.”
In 2015, Brothers Vilgalys opened a tasting room next door to its production facility in downtown Durham. Vilgalys is proud to be part of a revitalizing Durham. He hopes that the laws in North Carolina will become liberalized, to allow businesses in the craft distilling space to sell cocktails by the drink.
“The vision is to be like breweries, where we can run pilot batches and test them in our tasting room. I’d love to have a cocktail bar.”
For now, Vilgalys is bringing the rich warm qualities of Krupnikas to a host of homes and restaurants on the East Coast.