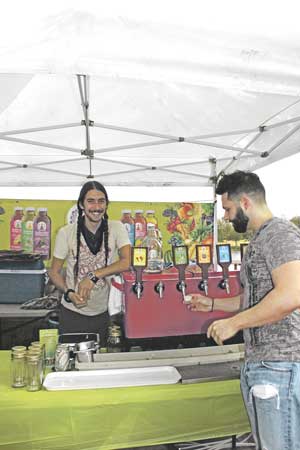 by Laura Rodley
Kimberly Lanski of Buddha’s Brew in Austin, Texas has been making their raw and unfiltered Buddha’s Brew Kombucha since 2006. Infused with strains of organically grown G. Xylinus, Z. Bailii, D. Bruxellensis, P. Membranifaciens and D. Anomala, each bottle contains 19 billion live probiotics.
It is also chock-full of the beneficial acetic, gluconic acids and enzymes, such as glucosamine, beta glucan, and levan, plus B vitamins, polyphenols and antioxidants.
“We found a way to ‘super’ seed our kombucha so the probiotics go crazy and [are] super healthy. We get all sorts of good comments at farmers markets,” said Lanski. What is unique about kombucha is that it contains probiotics that aren’t found in any other foods. “Authentic kombucha has even more. Ours is super authentic.”
She became energized about kombucha after she tasted some for the first time. “I had a friend who made it. He was a professor at [the University of Texas]. I said, ‘Wow, I love it’.”
She loved it so much that she started selling it at local farmers markets. It became so popular, she was able to support herself full time. She coined the name Buddha’s Brew for her kombucha because, “I was meditating a lot and am very spiritual. I like all spiritual teachers and saw kombucha as a both an energizing and relaxing drink, good for health, just like meditation.”
She became so busy making and selling kombucha that by 2008 she sought a business partner and found the perfect one: John-Paxton Gremillion, otherwise known as J.P.
“We scraped together some money and rented some units in a warehouse and built a commercial brewery in Oak Hill,” said Lanski. Initially, they rented two out of nine units in the warehouse in Oak Hill, a southwest Austin suburb that runs alongside Williamson Creek.
Their business was so successful that they were able to take over all the units. They recently bought the property, encompassing one acre, with two warehouses, and the creek flowing at the end.
They planted a whimsical and utilitarian garden along the creek’s bank. “We have a beautiful garden with basil and mint that we use,” said Lanski. They use organic ingredients or grow their own for the kombucha whenever possible. In fact, the probiotic P. Membranifaciens is derived from the garden’s grapevines.
They now sell at eight farmers markets that run all year long, and at 1,000 stores, mostly in Austin.
They mainly self-distribute their product, but also utilize a couple distributors that take their kombucha to the rest of Texas. They sell a revolving 12 seasonal flavors, including Peach Mint, Grape Lime, Grapefruit, Pineapple Super Greens and Ginger.
“It’s really cool that Buddha’s Brew is in 200 convenience stores with the Buddha’s wisdom sayings on the label,” said Lanski, who drinks her product daily. “I love it.”
Concerned with sustainability and reducing waste, they sell their kombucha in refillable pint bottles and growlers and bring-your-own jars.
Because their kombucha is so popular and requested at so many fundraising events, Buddha’s Brew has a standardized online form for people asking them to donate kombucha for their event, provided in bottles, growlers and 5-gallon kegs.
For more information, visit www.buddhasbrew.com.