Building roots one draft at a time 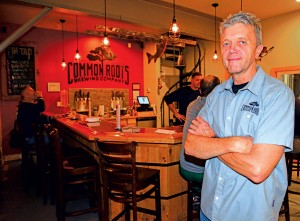 by Sonja S. Stark
Roots are dependent on three basic tenets to grow:  water, soil and oxygen. Before long an intricate system of subterranean branches, twisting in all directions, will hold the tree securely in place. Should one small shoot die, it won’t matter, there are plenty more to sustain the tree.
Metaphorically speaking, Common Roots Brewing Company (CRBC), a microbrewery celebrating their first year of brewing, subscribes to a similar philosophy. It’s no surprise that their logo is the profile of a burgeoning sapling with roots digging deep into the ground. An outline of a mountain range, presumably the Adirondacks, is etched into the foreground.
This artful logo is wisely splashed throughout the taproom reminding customers how important the “root building” concept is to their mission. A Founders Club poster lists all the families and individuals who helped launch the startup, that produced between 1,000-1,200 barrels by the end of 2015.
“Being a part of something bigger than ourselves through community involvement is a priority that helps elevate our presence,” insists Bert and Christian Weber, a father/son team who always dreamed of owning a brewery.
The pair had their epiphany moment in fall 2013, while participating in the hugely popular 100-mile bicycle ride — Seagull Century — on the eastern shore of Maryland. Paying little mind to a formidable Atlantic headwind and scorching sun, they brainstormed details on their next great adventure all the way to the finish line.
Bert’s vocation was always in teaching, with experience in construction and design. As for Christian, while working on his Master’s Degree at Plymouth State University, he completed several internships at small breweries throughout New England. During an apprenticeship at the White Birch Brewing Company in New Hampshire, he impressed the boss by formulating an aroma-choked concoction using spruce tip ingredients aging on fresh hewn, air-dried cedar wood.  He dubbed the mixture “Colonial Ale.” It proved to be a big hit.
After sipping samples of the ale during another Granite State brew festival, Christian’s parents admitted to each other that their son had a flair for fermentation.
Fast-forward one year and the spirited twenty-something is turning trial brews into rich batches popular enough for distribution to eight counties throughout upstate New York.
“We owe our success to local partnerships. Connections and opportunities that support our community in positive ways are ideals embedded in the mission of CRBC,” say the Webers.
Other partnerships include buying beans, getting their thermal energy production and having pizza delivered to their taproom from local businesses. The local mead for their Belgian Honey Ale comes from two different apiaries and the malted grain mash (an organic byproduct of brewing) feeds happy cattle at a nearby dairy farm.
“I’m told that the cows will eat nothing else when our spent grain is served,” smiles Bert.
CBRC is housed in a 5,000-foot facility, a former warehouse and truck repair shop. Inside, the taproom invites guests to observe the 620-gallon stainless steel deity through four large windows from high-top tables. For additional warmth, low-lying light fixtures and repurposed wooden catfish art hang prominently under vintage steel beams. Both were purchased locally.
CRBC buys sought-after bourbon barrels from two nearby distilleries and once their use is through, the barrels are recycled — they get dismantled and carved into kindling-looking tap handles.
Weber’s open-door growler policy is a philosophy shared among many in the lucrative brew tourism sector of New York State. Beer enthusiasts can pop by on their way home from work with arms full of empty growlers for a quick refill of eight flagship flavors: limited, seasonal and regular favorites.
“The secret to all our beers is love and quality ingredients,” says Bert. “Unlike some microbreweries, we happily refill regardless if the growler label is a competitor.”
Tireless fundraising for local nonprofits is another exercise in social responsibility that makes CRBC unique. Having left a stint managing an environmental nonprofit, the Lake Placid Land Conservancy to become head brewer, Christian stays connected to his roots by raising awareness in creative ways. “It makes good economic sense to reciprocate our appreciation with events like yoga sessions and film series.
Every month, a yoga class is held in the actual brewery, right in front of the tanks! CRBC General Manager, Robin Weber, provides both green and pink mats with patient instruction.
Donations made by our patrons go directly to local causes like animal rescues and children’s issues.” So far, over $1000 has been raised and donated — like the tree allegory reminds us, these relationships benefit all.