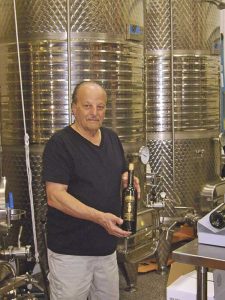 by Paul Burdziakowski
Despite over 40 years of wine making experience and a knack for producing award winning wines, John Catania had no intention of starting a winery when he moved from Durham, CT to Englewood, FL in 2009. He had just come out of a challenging business experience and the last thing he wanted to do was get right back into it.
However, Catania couldn’t stay away for long. Catania found himself purchasing an old manufacturing space in an industrial park. He then proceeded to take two years gutting and cleaning out a building which, according to Catania, previously operated as a machine shop and was condemned by the city.
The idea at first was to sell and repair winemaking equipment but along the way Catania incorporated wine making as well. Catania started small at first, focusing on cabernets, but before long he expanded his product and was back making top quality wines.
Catania produces a variety of custom blend wines as well as red wines, such as his award-winning Cabernet Savignons, and white wines, like his Savignon Blancs. When it comes to awards Catania says he has received well over 300 during his lifetime. Catania takes a lot of pride in knowing he won an award for some of the more prestigious wines but he doesn’t claim any of the prize money for himself. Instead he donates all the winnings to different cancer societies as a way to honor a beloved family member which succumbed to the disease.
“Brunello wines are the toughest wines in the world to make and we got a silver out of it at the Florida State Fair,” Catania said. “Out of 5,500 entries I came in second with my Cabernet Savignon at a wine competition in Traverse City, Michigan. Every time I win I don’t take dime of it. I donate all the money to cancer societies.”
Catania says he learned the art of vinification at a young age from his grandfather in Italy. Catania eventually moved to the Northeastern U.S. where he took courses in modern winemaking at the University of Hartford. Catania went on to operate a very successful winemaking business in Connecticut for decades before eventually retiring and moving to Florida.
Catania says his winery is the only location within a 50-mile radius which makes hand-crafted wines. Be that as it may, some people are rather surprised by the placement of his business. Catania’s Winery is tucked away in an industrial park about two miles from the center of Englewood and 10 miles from a major highway. Catania, however, says this is strategic and he likes where he is located.
“The reason that I’m located off the beaten path is because I want good people to come through my door and that’s what I get,” Catania said. “The only way they can find me is by signs, newspaper articles or websites like TripAdvisor.”
That is exactly how Sarasota residents Ellie and Doug Himes found Catania’s winery.
“We saw the signs for about a year and finally found an opportune time to stop in and visit,” Himes said.
Like most first-time visitors, the couple did not come away disappointed. Upon entering the winery, they were greeted warmly by Catania and got a firsthand look at all different product he sells in addition to wine.
The tasting room features three 500-gallon stainless steel wine vats.
Catania doesn’t hold back with his visitors in revealing why he believes his wines are so well received. For starters, Catania says he gets most of his grapes from California because he feels they are of the highest quality with no pesticides. Catania then blends the grapes with fruit that he gets from Canada.
“Grapes are acidic so I blend fruits because they are more alkaline and balance the pH of the wine,” Catania said. “On reds I use cherries, blackberries and blueberries. With whites, I always use pear or peach. I don’t add water or sugar to any of my grapes during the winemaking process.”
Catania ages his product in stainless steel. Catania points to the fact his wines have low sulfite levels and are generally aged for at least two years before they are made available to the public.
The final key to making quality wine, says Catania, is good sanitation. Everyone who steps into Catania’s Winery can see he keeps his business immaculate and he has the same standard when it comes to his product. When Catania is not open to the public, cleaning and sanitation is a major part of his regular job duties.
“Everyone says you got it made because you’re only opened a few hours a day but we’re actually working 14 hours a day seven days a week,” Catania said. “Sanitation is the biggest thing in wine making, always has been, always will be. All the bottles that come out the case go through a pressure wash, get run through a sanitation solution and dry on a rack for 24 hours.”
Catania credits his wife, Margherita, as a major part of the wineries success. In addition to her excellent cooking and baking abilities Catania says his wife is a jack of all trades.
“My wife is constantly in here helping me with people,” Catania said. “She also makes breads, cookies and sausage. She works as hard if not harder than me.”
Catania says winemaking runs in his blood and he would like to continue doing this for as long as he can. His favorite part of the business is meeting new people and teaching winemaking classes, which he offers for free to anyone who purchases one of his wine kits.
“I’m known for making quality cabernets and I want to continue doing that,” Catania says. “When it comes to winemaking there is always something new to learn. You don’t become a winemaker overnight.”
For more information on Catania’s Winery visit their website at www.cataniaswinery.com .