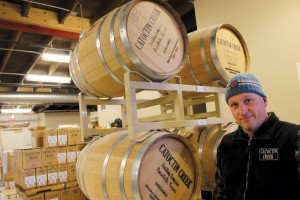 by Karl H. Kazaks
PURCELLVILLE, VA — At Catoctin Creek Distilling, owners Scott and Becky Harris are committed to continuing Virginia’s long history of spirits production. “We take a traditional approach,” says Scott, “Rye is something we want to highlight.” Catoctin Creek makes five spirits from rye. Those products, which make up the bulk of the 50,000 or so bottles produced at the distillery annually, are certified organic and certified kosher. The distillery also makes a variety of fruit brandies. Mosby’s Spirit® is an unaged rye spirit (legal moonshine), named after a Virginia Civil War hero. Roundstone Rye® is made in three expressions — 80 proof, 92 proof and a cask proof (which sometimes receives finishing aging in brandy barrels). The whiskies are aged up to four years in charred new Minnesota white oak barrels. Watershed Gin® is made from tails collected from the whiskey distillations, redistilled into a neutral spirit which is then flavored with classic gin botanicals.

Rye is the focus at Catoctin Creek because it was the main feedstock used for distilling whiskey in Virginia — as well as elsewhere in the mid-Atlantic, particularly Pennsylvania and Maryland, during America’s early years. Rum produced domestically from Caribbean sugarcane had been popular in the pre-Revolutionary era, but after the English blockaded the colonies once the War of Independence began, Americans turned to what they could grow domestically. “Rye grows well in Virginia,” Harris says. Farmers would even grow the crop, today used either as a winter crop or even just a cover crop, twice in a year – back to back in the winter and summer. “Virginia’s history is all about rye.” So when they decided to start a distillery, they wanted to make Virginia’s whiskey, rye whiskey.
Last year, Scott and Becky moved their operation to a new location, a 6,000 square foot facility in downtown Purcellville, in the heart of the northern Virginia wine country. The new location has a 41 kWh solar array which provides the distillery with about 85 percent of its electrical needs. The new facility also has a new still, a 1200-liter Kothe hybrid pot-column still to go with the 400-liter version of the same still which was their first still. “We chose Kothe because of the quality of their equipment,” Harris says, “They make good products for craft distillers.” The new, larger still (like the smaller steel, made with rolled copper) will allow the distillery to increase production.
The distillery doesn’t have jacketed stainless steel fermentation tanks because, as Harris explains, they’re committed to “traditional room temperature fermentation,” the same way Virginia’s early distillers did it.
In addition to making rye-based spirits, Catoctin Creek also makes brandy (which usually isn’t organic, due to the difficulty of growing organic fruit in the region). Mostly they make brandy from apples but they have also distilled grape wine and peaches. The cider they get from a Virginia cidery which has helped them develop a blend of varieties good for brandy production. To make brandy from grape wines, Catoctin Creek has developed relationships with wineries that understand their need for fresh wine, made from grapes picked early (with good acidity) and produced without added sulphur. Being located near the major metropolitan region of Washington, D.C. and in area that has an established reputation for beverage tourism (Loudon County has over 20 wineries), has helped Catoctin Creek with its retail business. On an average Saturday, several hundred customers will visit their tasting room.
Like many other craft-scale beverage companies, Catoctin Creek drives its retail base with a VIP club and promotions such as dinner at the distillery (sometimes with live music) and dinners at prominent area establishments. In the tasting room, in addition to selling Catoctin Creek merchandise, they also sell cigars and artisanal chocolates.They also have bottling workshops, where volunteers help with bottling.
Retail sales account for about 20 percent of the distillery’s production. The distillery’s domestic wholesale reach is in the eastern U.S., from Boston to Savannah and west to Nashville. Some of Catoctin Creek’s products have been exported to Singapore, and this year the distillery’s gin and three types of aged rye will be exported to Europe. “The market for American spirits in the U.K., France, and Germany is strong,” Harris says,“In Europe, American spirits are held in super high esteem. They love American whiskey.”