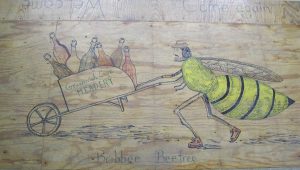 by Kristen M. Castrataro
What do you get when you cross a Revolutionary war hero, a Caribbean-loving hippie, and a bacchanalian Viking? The answer: Robert Allen Greene III, owner of Greenwich Cove Meadery in Coventry, RI.
Bob Greene grew up in Greenwich Cove, RI. His grandfather and father own a packing business, building pallets and shipping crates, but Greene always wanted to start a business of his own.
In many ways, Greenwich Cove Meadery is the natural fulfillment of that ambition. The meadery takes the many disparate elements of Greene’s history and ancestry and distills them into a smooth, fluid whole. Greene descends from the Vikings and the Revolutionary general Nathanael Greene. From both he has inherited a sense of adventure, industry and a passion for mead.
Mead is the oldest fermented beverage known to man. The first versions most likely occurred when beehives flooded, activating naturally occurring yeasts, and creating a liquid with around a 0.5 percent alcohol.
Greene’s meads are more potent than that. Following his grandfather’s recipe, he has been experimenting with rum-mead with an alcohol content of around 16-18 percent that retains all the punch of the rum. He laughs, “I’m chasing a dragon now.”
Greene’s pursuit has expanded far beyond his wildest dreams. He is now concocting meads that are gaining approbation in Rhode Island and beyond. He earned a third place in the prestigious “Mead Free or Die” competition in New Hampshire, despite the fact that all of his meads are unfiltered. Clarity is a key element in most mead contests, so cloudy products often rank lower than other meads.
In some ways, however, the cloudiness embodies the values that make Rhode Island’s first meadery so popular with its customers. Greene’s meads begin with raw, unfiltered honey. He adds water filtered by reverse osmosis to eliminate impurities. Then he adds yeast nutrients. The secret to Greene’s meads is in the next step. He uses only whole fruits, herbs and vegetables in his meads. After the fermentation process is complete, he scoops out the unwanted materials with a minnow net and lets the mead sit until the desired flavor is achieved. The result is unfiltered goodness, free of sulfites or additives, “an honest product,” Greene says.
It is this desire to create a wholesome, natural product that inspired his company trademark bee, “Bobbee Beefree”. Bobbee appears on every label pushing a wheelbarrow full of produce featured in that mead. Cranberries, grapes, rhubarb, lavender, ginger, habaneros; Bobbee Beefree has peddled all these and more in his wheelbarrow.
Greene cares deeply about the quality of the ingredients he uses in his meads. To that end, he grows many of his own herbs and grapes, and has recently put in some fruit trees. He also keeps his own bees, though he also purchases honey from other beekeepers to meet his demand. Unfortunately, this past year a group of local kids destroyed all of his hives. He is starting over from scratch with a wild swarm he collected from a friend’s backyard. As with all his endeavors, Greene strives to keep his beekeeping as natural as possible. He works his bees without suits and only smokes them when absolutely necessary.
Using quality ingredients is only the first step in creating quality mead.
If you are looking to reproduce Greene’s work, you will most likely run into difficulties. The reason is that Greenwich Cove is a true craft meadery. The ingredient ratio remains the same, but hardly anything else does. The bacteria he uses for each batch comes from the bottom of the last batch, subtly altering the taste of subsequent brews.
The length of time required for each brew to finish can also change. Greene believes in judging mead by taste, not by a formula. Therefore his meads can take anywhere from two months to two years to complete. Some of his favorite meads have come about thanks only to his patience. If an experimental batch doesn’t at first meet his expectations, he follows a simple premise: “Don’t ever throw it away . . . let it age and keep checking back.”
Of all the batches he’s made, there is only one he can recall completely discarding. It was pumpkin mead. The first version he had made, he baked the pumpkin prior to incorporating it into the honey. That was a success. The second time, he decided to use raw pumpkin. It didn’t take him long to realize the caramelization occurring in the baking process was critical in creating the desired flavor.
Greene freely shares experiences like this with strangers and friends alike. Whether a first-time customer or a long-time friend, anyone who walks into Greenwich Cove Meadery will get as much brewing talk as they want. That, and a whole lot of truly memorable mead.