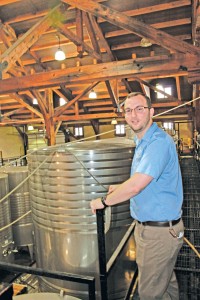 by Karl H. Kazaks
FLOYD, VA – Chateau Morrisette stands tall in the Virginia wine industry, being both one of the largest producers in the commonwealth and one of its longest-standing. The winery took root in 1978 when David Morrisette and his parents Bill and Nancy planted vines on their estate here, adjacent to the Blue Ridge Parkway. Chateau Morrisette is just one of six active Virginia wineries founded before 1980.
After graduating from Mississippi State University’s first class in viticulture and enology in 1982, David made the winery’s first commercially available wines.
The winery makes dozens of wines and is distributed widely, a testament to the favor the winery’s products have found among consumers. The winery makes over 60,000 cases of wine annually, using fruit from its vineyards as well as from other growers in Virginia and North Carolina.
This year’s harvest at Chateau Morrisette is the first being helmed by Brian Smyth. “It’s been incredible,” Smyth said. “The ferments are all tasting great.” Smyth attributes the success of the vintage and the winery in general to the long-standing team in place at the winery, starting with David Morrisette and including the entire winemaking team. “It’s incredible that we’ve been able to retain this talent in southwest Virginia,” he said. “You could take any one of these guys or gals and put them in Napa, Bordeaux, the Barossa Valley and they’d be at the top of their game.”
Smyth knows something about foreign winemaking cultures, having earned his master’s degree in enology from Australia’s University of Adelaide, after spending a previous stint in the country working a harvest.
“The first time I went to Australia I didn’t know I’d go back,” he said.
Smyth, a North Carolina native, studied at Virginia Tech. While an undergraduate, he spent one summer at Keswick Vineyards, where he caught the wine bug. After graduation, he worked at some custom crush operations in Oregon. Then he decided to pursue his advances studies, choosing the University of Adelaide because he liked the practicality of the program.
The winery at Chateau Morrisette is impressive, housed in a 32,000 square foot timber frame building built with salvaged Douglas fir timbers. Its numerous stainless steel tanks have a combined capacity of approximately 130,000 gallons, and an additional 50,000 gallons can be kept in American and French oak barrels.
“It’s an absolutely incredible facility,” Smyth said. “Some of the equipment we have, it’s amazing.”
On the crush pad there are two bladder presses. Nearby is a refrigerated trailer, used to hold fruit prior to crush. The trailer helps both to facilitate the logistics of handling many tons of fruit as well as to help improve wine quality. Cooling white varieties out of the field, Smyth said, leads to “fewer phenolics and less astringency in the finished wine.” Inside, a cross-flow filter is used on all wines pre-bottling, something that’s especially important for the winery’s sweet wines.
When fermenting reds, Smyth likes to start pretty warm, to ensure a healthy yeast population. Once the ferment is going, he looks more at the rate of fermentation — shooting for an average of 2.5 Brix per day — rather than a set temperature. At that rate of fermentation, he knows the wines will have enough time on skins to get good extraction.
As for cold soaking, Smyth is experimenting with its affects. He separated one batch of Cabernet Franc into two tanks, one of which was cold soaked, one of which was not. “The color’s the same, but the taste is different,” Smyth said. When fermentation is complete, the lots will be blended together at pressing.
With its fast-ripening conditions, this year has been a good year for Virginia wine grape producers. Smyth credits the winery’s vineyard manager Steve Van Sutphin as well as the many growers the winery works with for producing high quality fruit. “They make my job easy,” he said.
Smyth then repeated his praise for his winemaking team, who during a rain-delay in harvest were preparing to filter the lees from a batch of cold-settled Niagara. “They make this place run.”