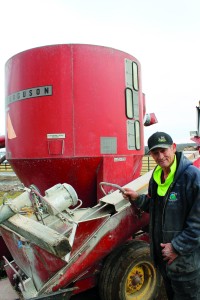 by Karl H. Kazaks
CULPEPER, VA — There are so many links to the past at Belmont Farm Distillery that the photos accompanying this article might as well as be black-and-white. The distillery, founded by Chuck and Jeanette Miller in the late 1980’s, is the nation’s oldest craft whiskey distillery. Its bottling line is made of vintage equipment, dating back 50 or more years. Its copper pot still was manufactured in 1933. The distillery’s most resonant link to America’s spirits tradition, however, is Chuck Miller himself. Miller is a tall, ebullient man. With jeans, a checkered shirt, bandana neckerchief, wide-brimmed leather hat and an indefatigable, can-do attitude, Miller is a throwback to American’s western frontier.
Miller first encountered the art of whiskey-making from his moonshining grandfather. “It took me a while to figure out what he was doing. He had a lot of milk tanks but not that many cows,” Miller remembers. He started his distilling operation at the tail end of his career as an airline pilot for Eastern Airlines. As the airline encountered difficulties in the late 1980’s, he could see “the writing on the wall.” He and his family were living on a farm in southern Culpeper County, doing some farming, even growing grapes for a few years, before Miller remembered how his grandfather distilled corn. So he decided to use the corn he was growing to make whiskey and thus Virginia Lightning, a 100 proof clear corn whiskey, was born. “There was no competition,” Miller recalls of that era in American distilling. “People weren’t into it. It was really easy to get equipment. I wish I had bought more stills. They were cheap back then.” At the time there were some artisanal operations in California making brandy, but no small whiskey houses. “We weren’t even called craft distilleries back then,” Miller said. “Nobody had heard of a small producer.”
All of the grain used at the distillery, primarily corn but also some wheat and barley, is grown at Belmont Farm. In recent years, the distillery has added a second line of clear corn whiskey, called Virginia Lightning Moonshine, a 90 proof product with a slightly different filtering regime than the original Virginia Lightning. “It’s easier to drink,” Miller said. “I call it my designer moonshine.”
The distillery also makes a second line of products under the Kopper Kettle name. The highlight of this line is Kopper Kettle Virginia whiskey. Like bourbon, the whiskey is mainly corn and aged in charred new oak barrels, but unlike bourbon it receives a two-month pre-soak with oak and applewood chips prior to casking. “I didn’t want to make a bourbon,” Miller said. “I wanted to make a Virginia whiskey.” The whiskey is aged for four years in 53-gallon barrels. This year Miller will bottle and release 25 barrels of Kopper Kettle Virginia Whiskey. He has been building inventory, so next year he’ll release 100 barrels. The goal is to have 200 barrels per year to sell. “I wish I had known it was coming,” Miller said, referring to consumers’ surging interest in craft spirits. “I would have made more Kopper Kettle.”
In addition to Virginia whiskey, the Kopper Kettle line also includes a vodka which is already in distribution, a gin which is awaiting approval from Virginia’s ABC and a cane sugar-and-molasses rum which is undergoing a two-year aging period in old Kopper Kettle whiskey barrels. When Miller learned his old whiskey barrels were being exported to Caribbean rum producers, he decided it was time to start making rum himself. Miller is also aging true bourbon, in large Minnesota oak barrels. It has yet to be released.
Counting Miller, the distillery has four full-time employees. Three operate the seasonal tasting room, which on the weekends attracts hundreds of visitors. “We’re not fancy but people like it here,” Miller said, of the rustic charm of the tasting room. There’s also a full-time employee in charge of farming.
Belmont Farm currently raises about 150-acres of grain. About 75-acres of hay ground can be converted grain production to help the distillery continue to supply its own grain as it expands. In years past, as Miller needed more space, he brought in shipping containers and used them for storage of bottles and the like. But today the distillery is building a new production and barrel aging facility. The plan is to add two more stills, another pot still and a column still. The column still will be used for vodka and gin, while the whiskey and moonshine will continue to be made in pot stills.
With his present setup, the 3,000-gallon still, two 1,600-gallon fermenters and two 2,500-gallons fermenters, the distillery “is pretty much at full capacity.” At present, the distillery’s own labels are sold in Maryland, Virginia and Washington, D.C.
Last year, Miller started to produce Climax moonshine for Tim Smith, the star of the Discovery Channel show Moonshiners. Smith comes to the tasting room about once a month when the tasting room is open. “When Tim’s here, the place is so crowded you can’t hardly move,” Miller said. The plan is for Smith and Miller to build the second pot still themselves. The new production building will also be home to a second bottling line, recently retired from a Diageo plant.
Miller’s current bottling line is an amalgamation of vintage equipment, a testament both to the durability of the old machines and the lack of demand for such machinery when Miller assembled the pieces in the late 1980’s. The filler is from 1945. The Cap’Em capper is from the 1930’s. “The new ones haven’t changed that much,” Miller said, “maybe added multiple heads.” The labeler is a Meyers from 1962. “It’s a neat old machine,” Miller said. “It really clicks along. It was a real fancy model in its day.” Miller likes the partnership with Smith because it’s a good combination of talents, Smith is a good marketer and Miller is good at making whiskey. “I like making whiskey. It’s a fun thing. It’s exciting.”