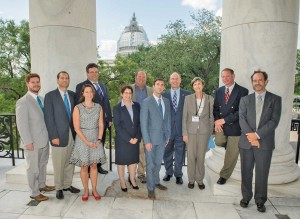 The Board of Directors of the United States Association of Cider Makers (USACM) met in Washington, D.C. last month to gain support for the Cider Investment and Development through Excise tax Reduction (CIDER) Act.
Board members met with Congressional members from across the country in support of the proposed legislation on Capitol Hill, and followed the visits with a Cider Reception and Tasting, where invitees got to sample fine craft ciders from around the United States.
The CIDER Act (H.R. 600) was introduced by Representatives Earl Blumenauer and Chris Collins; and the senate version (S.1459) is sponsored by Senator Charles Schumer. Current federal tax law restricts the ability of American cider makers to innovate and compete in the global marketplace. The CIDER Act updates these rules so they conform to international standards, reflect the reality of the industry and make compliance less costly and more predictable for this developing land-based industry.
Board President, Mike Beck of Uncle John’s Hard Cider Company, said, “Our meetings were very productive and we left a favorable impression on the folks who represent us on Capitol Hill. We are encouraged that Congress will act on this common sense, job creating proposal and unlock the potential of this great industry.”
The USACM is an organization of cider and perry producers that collects and shares information about cider production, regulations and cider apple growing in the United States. Their annual meeting and conference, CiderCON, features cider makers from around the world who network and share the latest trends in cider sales and development. The next conference will be held in February 2016 in Portland, OR.