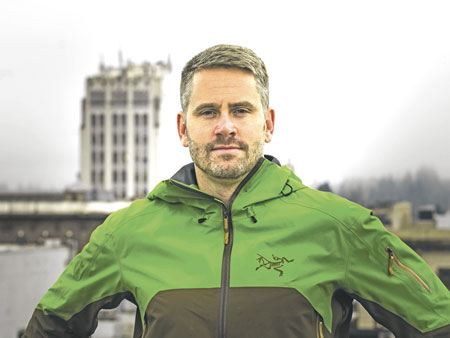 by Catie Joyce-Bulay
What Nick Gunn of Benchgraft Cider Consulting loves even more than making cider is helping others make it. “I like teaching and I like to consult,” said Gunn, who has over 14 years of cider making and orcharding experience. “I enjoy the startup phase of businesses and I get to help grow the industry.”
Specializing in startup and business management, Gunn works with cideries in all aspects of the business including cidermaking, product development and facility build out to help them become more profitable and better understand cash flow and business processes.
“I think a lot of first-time cidermakers really sink themselves by not recognizing the cashflow conundrum and difficulties in utilizing a fresh market agricultural item that is perishable and needs to be processed in a given period of time at the peak of freshness, but then sold throughout the course of the year,” he said. “It’s really hard to manage that for the first time entrepreneur or really anybody.”
Gunn became interested in fermentation when he married into the wine industry. Wife Mimi Casteel, whom he met while they both worked for the U. S. Forest Service, is the daughter of the owners of Salem, Oregon’s Bethel Heights Vineyard, which the family started in the 1970s.
“Both my wife Mimi and I had a passion for fermentation and wanted to stop work at the Forest Service,” said Gunn. “Unfortunately, there wasn’t a lot of full time work available at the winery because the first generation was still employed, which is a constant problem amongst family farm businesses.”
The couple put their heads together to come up with other ways they could earn a living from the land and decided to plant an apple orchard in 2003. With initial plans to grow cider apples for another cidermaker, Roger Mansfield of Traditional Company, they soon transitioned to making their own cider. They bought the company from Mansfield, who was ready for retirement and helped the couple get started in 2004.
They rebranded in 2005 as Wandering Aengus Cider Works, after Casteel’s love of the poetry of Yeats. The orchard and business grew and acquired partner James Kan, who brought business savvy and a new cider-making model, which became their Anthem Cider line in 2009, accelerating their growth.
Before Kan came on board, Wandering Aengus had a focus on high-end quality cider, similar to wine. “We didn’t really know how to make a larger volume product and we kind of just learned our lessons along the way,” said Gunn. “We stumbled a lot but we got through it.”
In 2016 Gunn sold his share of the business to David Ryan of Hood River Juice Company to work with others to avoid some of those stumbles he made along the way.
His first step with clients is to understand their cidermaking philosophy and three-year growth trajectory, or “where they want to be when they grow up.” Gunn helps clients design their companies and spaces around smart growth.
“So far, knock on wood, I haven’t had anyone fall on their face yet,” he said. “I’ve had some real lightbulb moments with clients where they were about to buy a whole lot of expensive equipment. If you buy the wrong stuff out of the gate, you’re going to be behind quite a bit and it could actually sink your business.”
Gunn keeps close tabs on the industry as a whole. One trend he noticed is its continued transition to cans, especially in six-packs, with a decrease in single bottle sales and appreciation. “It’s unfortunate because that’s one of the only ways that first-time small cider producers can get their products out the door,” he said.
“I think in place of a lot of single bottle sales we’re starting to see more draft availability.” He said bars and restaurants have been a little slow on the uptake but are beginning to create more space for ciders. “I think there’s a lot of opportunities still for small producers to get their ciders out on draft,” he said, noting a new cidermaker may be able to get one shelf placement for single bottles but if they plan on selling in volume they should consider a canned product for a quality price point.
“The cost of raw materials for a good quality cider aren’t really going down much,” he said. “If anything, they should go up because apples have been undervalued for the hard cider industry for many years.”
He sees a disconnect between growers and cidermakers, which some producers are solving with long-term purchase arrangements. “But it’s still a difficulty and there hasn’t been a great way to equate the price of quality bittersweet fruit with the price that the ciders can command in the marketplace,” he said. “Those two prices aren’t coming along as quickly as I would have hoped but I think as long as we keep working at it the growers can be successful as well as the cidermakers.”
Gunn predicts steady growth for the cider industry in line with craft brewing’s rate of 15 to 20 percent, especially in the local sector.