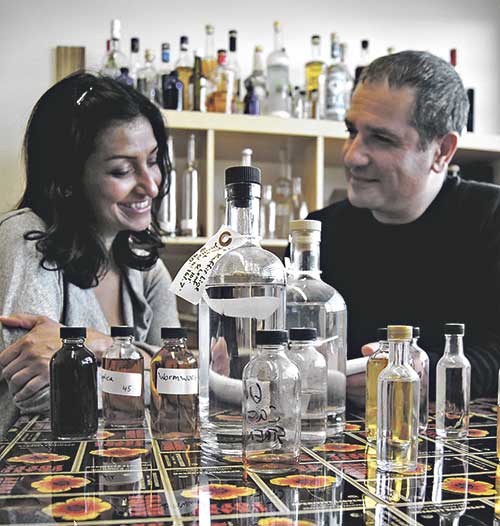 by Laura Rodley
When Greenbar Distillery launched CITY Bright Gin in August, they celebrated. First, they had a party for the Los Angeles bartending community and then another for the whole community in the Art District of Los Angeles, CA where the distillery is housed, co-founded by husband and wife team Litty Mathew and Melkon Khosrovian. Everyone sampled the gin for free and had a distillery tour. There was even a cocktail making contest, with a panel of judges and prizes.
“Everybody had a good time,” said Kate Paulley, Greenbar Distillery’s marketing manager.
Greenbar Distillery is the first distillery in Los Angeles since Prohibition. These days, they do not have to hide their gleaming copper pot still, their tall continuous fractionating column still created for Greenbar Distillery or the 10,000-square foot building that houses the distillery.
The fractionating column still allows for setting more specific temperatures “that are helpful for us to get the specific flavor we’re looking for,” said Paulley.
They have a tasting room where they can invite everyone to celebrate and partake of their latest and second gin, 17 organic spirits and 15 organic bitters. Their first gin, CITY Amber Gin, has been available since May, rebranded and given a facelift with new labeling.
Twenty-eight year olds to retirees attend their weekly cocktail classes. “We keep them intimate, 24 per class. It’s a hands-on class. The staff circulates as the students learn to muddle and to shake cocktails,” said Paulley. The class uses spirits, simple spirits and fresh produce.
They also hold spirit tastings for 20 to 30 people at a time. Each Saturday, they are pre-booked.
CITY Bright Gin is a love story between distillation of the flavors and diverse culture of LA, as explored by spirits makers Mathew and Khosrovian in constantly evolving restaurants and traditional gin ingredients. It incorporates Cassia and Sichuan peppercorn from Chinese restaurants’ hot pots and braised meats; cardamom, coriander, black cumin and fennel used in Indian and Pakistani dishes of biryani, chicken curry and halva; Thai herbs of lemongrass, kaffir lime and lemon balm — key ingredients for Thai salads and coconut soups; Ancho chiles and limes in Mexican salsas and guisados; lemon, peppermint and spearmint found in Armenian and Middle Eastern fatoush salads and hummus; Vietnamese basil and star anise that flavor pho soups; and juniper, California bay laurel, angelica, the spice cubeb, grapefruit and pink peppercorn.
“This is how Angelenos eat and that’s why we made CITY Bright gin,” said Khosrovian.
Plans for the gin’s nationwide distribution are geared for early 2018.
Khosrovian lived in Yerevan, Armenia until he was 11. There, family dinners included sipping fruit brandies — some made by his grandparents from excess fruits growing in their orchard — and East European grain vodkas. After the collapse of the Soviet Union, his family moved to Providence, RI. He and his family learned English and went on to own several businesses. A graduate of Connecticut College, he sought his PhD at University of Southern California’s (USC’s) Graduate School of Journalism and met Litty on his first day of class.
Litty grew up in Ethiopia, daughter of South-Indian parents. At age four, her family moved to Jamaica. When she was nine, they moved to the U.S., growing fruits and vegetables. She majored in political science and economics with a French minor at University of California Riverside. After meeting Khosrovian at USC, they married in 2002. She attended USC Journalism School, worked marketing for a beauty company and attended Le Cordon Bleu cooking school in Paris.
When it came to eating, their combined heritages embraced many palettes, making them fearless when trying out ingredients to make spirit infusions, first performed as a home hobby. Through positive feedback and to answer growing demand, Greenbar Distillery was born in 2004 and moved to LA. They adhere to their vision of making “exceptional spirits that their friends could afford to buy often.”
They had already discovered that using whole ingredients produced far richer flavors than those found that used highly processed or synthetic flavors.
While using batches of organic celery, grapefruit and other organic ingredients they discovered that organically grown produce contained even richer flavor and stronger aroma. In 2008, they changed their operation to fully organic, and a year later they launched TRU Vodka and gin, going on to include the world’s largest portfolio of craft organic spirits: CITY gin, CRUSOE Rum, FRUITLAB Liqueur, IXÁ Tequila, SLOW HAND Whiskey, GRAND POPPY Amaro and BAR KEEP Bitters.
Batch to batch flavor consistency is difficult using whole, fresh ingredients. The couple tastes every production at every stage several times a week to achieve 95 percent consistency. “Three percent is left to nature, and two percent is dedicated to making each batch better than the last,” they said.
The challenge of flavor stability was overcome by stress testing hundreds of ingredients to pinpoint which would stay bound to alcohol for long periods of time. Their favorites — fresh cucumber, horseradish, chilies, strawberries and pineapple — failed. They use local products whenever possible. They hand process ingredients, such as zesting lemons, as the resulting flavor is worth the effort.
Succeeding in reducing their carbon footprint was achieved by switching from using bottles weighing one kg to bottles using 38 percent less glass, by using 100 percent post-consumer waste recycled paper labels with simple UV coating and by using biodegradable bioplastic (PLA) tamper evident seals to reduce petroleum use. They plant one tree per bottle sold as one tree alone absorbs 790 kg of greenhouse gas emissions.
Since 2008, they have planted 613,055 trees in Central America’s rainforest in partnership with the nonprofit Sustainable Harvest International.
Their love of community and inheritance of the knowledge of the importance of celebrating home allows them to keep opening their hearts and doors to their community and experimenting with their taste buds while creating organic craft spirits to enhance the pleasure of dining and life.