Clearview Farms busy during the 2013 harvest 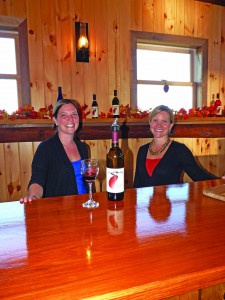 by Jon M. Casey
Sometimes, things really do seem to make sense. In the case of Branchport, NY’s Clearview Farms, its name makes perfect sense because of the spectacular, clear view that you have of Keuka Lake’s west branch, part of the Finger Lakes of Upstate New York. As you look out across this area from the Tones family farm, the rolling hills reveal farm after farm with fields bearing vineyards, each filled with rows of grapes ready for harvest. Along with the grapes are forested acreage and pasturelands covered with alfalfa, destined for cutting as haylage or hay.

For more than 60 years, Don Tones’ family has been farming here, beginning with a 10-acre plot in 1951. Since that time, Clearview Farms has grown to produce more than 15 varieties of grapes on 465 acres of land devoted to vineyards, with another 200 acres of hay ground managed and shipped to the horse racing industry from New York to Florida.
During a visit to Clearview Farms, we were able to spend some time with Don, his son Mike, Don’s brothers Harold and Jim, and Jim’s son John as we were nearing the end of a busy harvesting day. They were taking time to clean up and repair their harvesting equipment before moving to new fields a mile or two distant from this afternoon’s activities. As part of the regular maintenance routine, they like to keep their Korvan harvesters clean and in tiptop operating condition throughout the harvesting season. While Mike was moving their Korvan 3000 from one field to the next, Harold and Jim were busy making a repair on the Korvan 3016XL, the larger of the two units.
“We raise 18 or 19 varieties of grapes here on our farm,” said Don. “We like to try a new variety every so often and when we do, we like to go with what Cornell University and the University of Wisconsin recommends for this region. Since it can get down to 25 or 30 below here during the winter, we want to grow varieties that can withstand those kinds of winter temperatures.”
In addition to their own grape growing and hay farming, Don said they do custom harvesting for other growers in the area. “That is what prompted us to purchase a second grape harvesting machine,” he said. “We got our first one in 2000. When we found that we needed a second one because of our custom harvesting, we went with another Korvan unit as well. We like them because they are made in the U.S.A.”
Don explained that this year, the weather has brought some unusual conditions with regular intervals of rain. That reduced the need for weed management in the rows between the vines. He said in past years, he has used a Weed Wiper mounted on a 4-Wheeler to burn off the weed growth that tends to overrun the open spaces between the vines. This year, the weather prohibited that kind of weed control. He said that while this was unusual, the weed problem was not as bad as it could have been.
“We mowed like we always do, but the weeds didn’t pop up at the end of summer like they usually do,” he said. “It was too rainy this year. So we didn’t need to use the Weed Wiper this season.”
Don said that much of their grape production is under contract to juice producers and wineries, with some of their grapes now being grown and harvested for their own winery, a new addition to the farm since the fall of 2012. Stever Hill Vineyards, the name given to their retail store and wine tasting facility, features 17 labels, with all of the wine being custom-vinted for sale at Stever Hill. Don said that his daughters Elizabeth and Jennifer enjoy working at the new facility, a 19th century barn that has been fully renovated with an interior that has been finished in a way that highlights the post and beam construction.
Don, who is 61 years old, said that one of the things he likes most about family farming is how so many of the family members are able to be a part of the operation.
“My dad Harold, Sr. enjoyed participating in the farming as long as his health was still good,” he said. “Long years ago, he started doing things like offering Christmas rides and holding special events that helped keep the family and community involved,” Don recalled. “Dad passed away Aug. 28 of this year. This is the first harvest that he will not be with us. He was 88.”
“Today, as we continue to expand our business into the retailing of our own wine label, we are excited about the future of grape growing. One day, hopefully, we will be making our own wines as well. Having the family involved the way we do, is what farming is all about.”