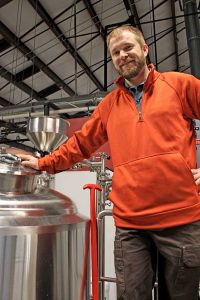 by Karl H. Kazaks
RALEIGH, NC — Compass Rose Brewery is based in North Raleigh, but uses global influences in its brewed creations.
“Globally inspired, locally brewed” is how Brewer Thomas Vincent put it.
For example, their Agave Cream Ale uses blue agave traditionally used in tequila production. The result is a brew with distinctive tropical and pineapple notes. Other beers utilize ingredients as diverse as tamarind, hibiscus, and local North Carolina honey.
The brewery opened in 2015 in a part of Raleigh, which didn’t have its own brewery. Since then, Compass Rose has become popular not just with area locals but also with beer lovers throughout the region.
It’s popular in part because of the taproom’s wide-open feel. The space encompasses over 5,000 square feet and has high ceilings. Its attention to detail that went into the design of the space is evidenced by the custom tap handles, phone chargers and purse hooks at the bar. But of course the popularity is also because of the fine beer made by Vincent.
In addition to the cream ale, flagship beers at Compass Rose include a Saison and their Wheelhouse IPA, an American IPA. The brewery, which at present sells its products in draft — selling kegs to establishments throughout the Triangle area and offering growler fills at the taproom — also makes pilot brews for its taproom regulars.
“We’ve made a double IPA for the hop heads,” said Justin McConkey, the brewery’s general manager. “And a Belgian golden, for those who like a beer with a higher ABV.”
Steve Bucklad is the brewery’s taproom manager. He holds down the fort when McConkey goes out to local bars, restaurants and bottle shops to drive the Compass Rose brand.
McConkey’s effort pays off two-fold, with the greater presence at other businesses plus future business at the taproom. “Eventually it’ll drive tap room sales,” he said. As consumers get familiar with the brand, they’ll seek out the beer at its home source.
Already, the large taproom has become popular for group events. The brewery has hosted numerous company parties, wedding receptions and even a wedding.
“With our big open space,” McConkey said, “we can be flexible in the layout of events.”
Developing methods for informing regular guests about when the taproom will be closed for private events is something the management team has been developing. They want to make sure the regular drop-in guests know beforehand when a private event is taking place at Compass Rose. One of the easiest ways of doing that, McConkey said, “is building great relationships with regular guests while they’re here.”
The brewery’s owners chose the location because of the unmet demand for a brewery in the neighborhood. And the space has turned out to be popular. The taproom is such a comfortable space, young parents from the area even bring their children. That’s welcome, but the brewery has drawn the line for their musical events. When the music starts, its 21 and up only.
In addition to music, Compass Rose has regular events like trivia night, corn hole competitions, yoga, and visits from food trucks to bring customers to the taproom.
Compass Rose also has a sister brewery in Mexico. Occasionally, Vincent — who also teaches brewing at Wake Technical Community College — will help the sister brewing team with technical issues.
But Vincent is most of all looking forward to making beer at the Compass Rose facility. At present it is outfitted with a 10-barrel system. The equipment was laid out to make it easy to upgrade to 20- and 40-barrel fermenters when appropriate.
As the brewery grows, its loyal customers will be able to savor more of its beers and build an even stronger legacy of memories at the taproom.
“One of our mottoes,” McConkey said, “is explore, enjoy, repeat. Trust your compass.”