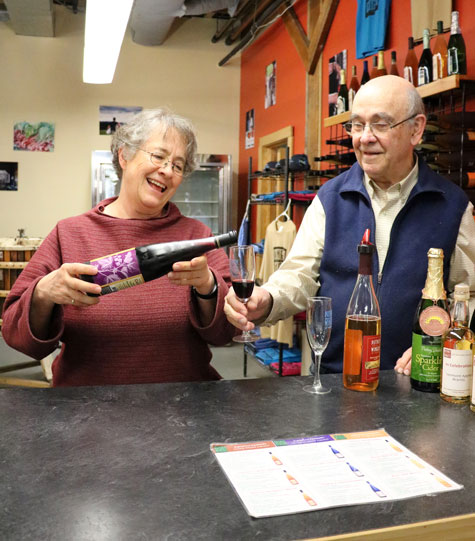 Kate and Charles Dodge of Putney Mountain Winery and Spirits in the tasting room with Vermont Cassis and their other award winning lineup.
Photos by Laura Rodley

Ginger and maple liqueurs and a red wine made entirely from blueberries? You can find unique delights, as well as rhubarb, raspberry, apple, black currant and pear wine, at Putney Mountain Winery and Spirits in Putney, VT, owned by Charles and Kate Dodge.

Their Simply Ginger liqueur just earned a silver medal at the San Francisco World Spirits Competition. It was the first time they entered this liqueur, mailing in two bottles of their ginger gold. “There are entries from all over the world; the winner was French. We are feeling very pleased with how we did,” said Charles Dodge. (The winner was Grand Marnier Cuvee du Centenaire Liqueur of Cognac, France.)

He is a retired professor from Dartmouth College, one of the first musicians to pioneer using computers in composing – “kind of my niche,” he said, which was what he taught at Columbia University while living in New York, and later at Dartmouth.

In 1989 the couple moved to Vermont to enjoy its beautiful landscape, where they found there was room to hone another niche. They started making wine at home in the summer of 1994, and found people were interested in it. Their first challenge in selling it was their location. “When we started to retail our wines, it was 1998 and the GPS was not in wide use,” Dodge explained. “Starting from our home, we are four miles from town on a gravel road and no one could find us.” After checking at the local gas station, he found a number of people had spoken to the attendant seeking directions to their home but still had not found it.

He soon consulted the owner of Basketville, which was in the center of Putney, and asked if they could rent a space for tasting and sales of their wines. “Sales were fine. People were really interested. You have to find a way for people to taste your wines, unless you are making wine that is completely conventional,” he said. Now they have three tasting rooms, including one in Windsor, next to Harpoon Brewery, and another in Quechee, VT, inside the Cabot Cheese Outlet. “We work jointly to provide experiences for people to see the best of what Vermont has to offer,” said Dodge.

“One of the challenges we’ve had is not using grapes. People assume wine is only made with grapes. Grapes don’t flourish here in southeastern Vermont; nobody is growing them,” Dodge said. “We went with what we could find that local farms had to offer,” emulating the way the French make regional wine out of what grows in their own terroir – traditionally grapes – resulting in unique, memorable wines.

Just a mile down the road from them is Green Mountain Orchard, where they buy their blueberries to make their “dry red” blueberry wine. “You get a whiff of blueberry at the beginning. When you swallow it, it feels like red wine going down. In the finish is the lingering taste of blueberries,” said Dodge. They have fun devising wines to satisfy the adventurous palate with what local farmers grow traditionally, rather than grapes. “Our most popular wine is a wine we call Rhubarb Blush, made of rhubarb, strawberries and raspberries,” said Dodge. 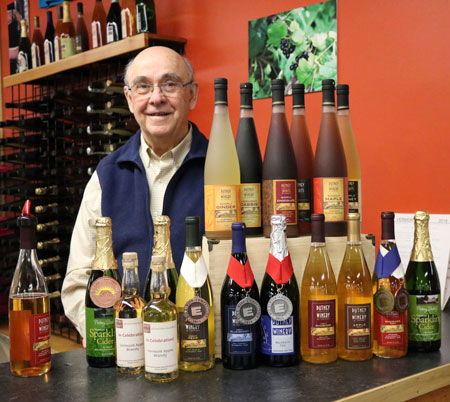 Charles Dodge showcases the variety of goods he makes in the tasting room, including their award-winning lineup.

“We don’t teach so much as demonstrate, to see if we have anything that might satisfy [customers],” he said. “Our other challenge was finding real good people. That challenge was very handsomely achieved through our current crew of excellent worker/colleagues,” said Dodge.

The couple has satisfied their aims to offer a culinary and ecologically sound tasting experience, with the added benefit of helping to keep the landscape solid, by helping to support at least 10 local farmers with their business. They’ve made some very good friends among the local farmers who depend on them as a consistent bulk buyer for their fruit. They are a certified Vermont Green business, and 100% solar powered.

Initially, it was Dodge and his wife who made the wine, and now they have 10 employees. Their rented space at Basketville is currently 1,700 square feet, and they’re in the process of expanding that to 4,500 square feet to have a bigger production and tasting area. They have tastings daily at the Putney venue, except for Thanksgiving and Christmas, and daily customers.

“In summer and leaf season, it’s very busy,” Dodge said. “It’s just one more step to be open for the public. The tasting room is a real boon to business; we don’t have to rely entirely on wholesale.”

With a capacity of 7,000 to 8,000 gallons, they currently make 40,000 bottles of wine a year, fermented in 15 to 20 stainless steel tanks. When they started in 1998, Dodge bought tanks made by a company in New Jersey. “Since then, I have bought tanks mainly made in Italy, which is known for its wine manufacturing equipment. They distribute wine making equipment around the world,” he explained.

They didn’t start making liqueurs until 2016. Though they are licensed to own a still, they don’t have one as yet, and therefore buy their alcohol from another Vermont licensed distiller.

The unique nature of their liqueurs and wines allow them to stay ahead of the curve. “The landscape is always changing,” Dodge stated. “Twenty years ago, Basketville was a thriving retail business. They’ve just closed, due to big box stores and online businesses. They’ve changed from a retail to a wholesale online business, a basket importer instead of a basket maker.”

Of their wine evolution, Dodge said, “It’s been really fun. I was a college professor before this. I enjoyed the change from teaching and research to something more enjoyment based. People like tasting wine.” It’s another kind of composing, and this time, the end result is in a bottle. For more information, see www.putneywine.com .