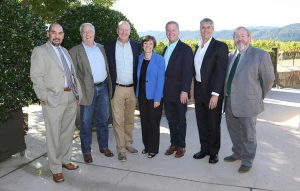 OAKVILLE, CA – The United States Department of Agriculture’s (USDA) Animal and Plant Health Inspection Service (APHIS), the California Department of Food and Agriculture (CDFA), and the California County Agricultural Commissioners marked the eradication of the European grapevine moth (EGVM), a serious threat to California’s agricultural economy, from California on Oct. 21 at an event in Napa County, CA.
EGVM was first detected in a Napa Valley vineyard in 2009. Subsequent surveys detected the moth in 11 California counties, representing a serious threat to California’s $4 billion grape crop, a crop which has an economic impact to the State of more than $57 billion annually. The pest also jeopardized valuable export markets for U.S. grapes, as well as for stone fruit, another EGVM host.
“The key to success was early detection, rapid response, and strong partnerships,” said APHIS Deputy Administrator Osama El-Lissy. “The strong collaboration between federal, state and local officials, growers, university scientists and extension services, who all invested in finding and implementing the right tools to safeguard California grapes, makes this a model for fighting future invasive species threats.”
A Technical Working Group composed of scientific and technical experts from the U.S. government; universities in California, Italy, and Chile; and the California grape industry, provided APHIS and its partners with the best available science and data to combat EGVM. Based on their recommendations, APHIS and its partners designed an eradication program that produced results by closely involving growers and the community.
“The growers and their communities where this pest carved out its foothold deserve the lion’s share of the credit for eradicating the European grapevine moth,” said CDFA Secretary Karen Ross. “They formed and sustained the cooperative effort with our agencies that ultimately achieved this goal. We are gathering to celebrate this mutual achievement, but perhaps more importantly we are here to say how proud we are of the partnership that got us here – a partnership that remains ready to respond to the next threat to venture into our vineyards.”
While most of the efforts focused on the growers and what they could do to stop the moth, partners recognized a need to engage residents in the larger community on this issue. “Some residents in the greater Napa area grow grapes as a hobby. They too needed to take steps to prevent EGVM from becoming established in the area,” said Greg Clark, Napa County Agriculture Commissioner. “We also knew from experience that people outside agricultural production areas may be more concerned about our solution to a pest problem than the pest itself. With both of these factors in mind, counties worked closely with APHIS, CDFA, and others to develop targeted public awareness and education campaigns. We used the news media, billboards, signage, and public service announcements to get the word out to the public about EGVM and our work to eliminate it from California.”
The grape industry along with the State, county, university and Federal cooperators will remain vigilant by continuing to monitor for EGVM and other grape pests. Learn more about EGVM and other invasive pests at www.HungryPests.com.
Visit http://plantingseedsblog.cdfa.ca.gov for more information.