Copper Fox ~ a pioneer in the new generation of craft distilleries 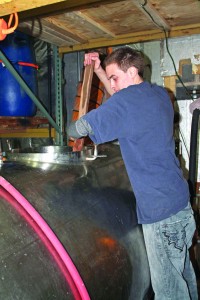 Uses fruitwood to flavor malt
by Karl H. Kazaks
SPERRYVILLE, VA — It’s rare that an enterprise can call itself unique to the world. Yet that is exactly the case at Copper Fox® Distillery, which makes the world’s only fruitwood-flavored whisky.
The idea came to Rick Wasmund, owner and operator of the Copper Fox, as he was cooking with apple wood. Why not use the smoke from fruitwood, he thought, to flavor malt destined to be made into whisky?
Further, why not use toasted fruitwood chips when aging the whisky in barrel?
It took some years — during which time Wasmund spent time interning at Bowmore distillery, on Islay — for the inspiration to become reality, but Wasmund finally opened his distillery, distilling his first batch in January of 2006.
Today the distillery makes almost 1,000 cases of spirit each month, having moved to seven-days-a-week production last year. About one-quarter of the distillery’s production is sold overseas. In the U.S., Wasmund’s spirits can be found in about 20 states.
Copper Fox’s product line includes the fruitwood-flavored Wasmund’s Single Malt Whisky and Copper Fox Rye Whisky (with a mash bill of two-thirds rye and one-third barley) as well as a 100 percent barley gin, VirGin.
The distillery also makes two clear spirits — a rye spirit and a single malt spirit — both are distilled to just under 160 proof to retain the flavors of the grain. (They are not meant to be a neutral grain spirits.) The spirits are bottled at 124 proof (cask strength) and are favored among Copper Fox’s customers who like to experiment on their own with wood aging. The distillery has small, new lightly charred American white oak barrels it sells precisely for that purpose.
Unique among North American distilleries, Copper Fox hand malts its own barley. It also sources its barley (Thoroughbred, a six-row variety) from within Virginia, from the Northern Neck.
The malting process begins by steeping barley in water for three days, with three changes of water. It is then laid on the malting room floor for five days and raked every four to five hours.
What comes next is what sets Copper Fox apart. Instead of using peat to flavor the malt as done in Scotland, Wasmund uses smoldering fruitwood to flavor his malt.
Distillation is performed with a single batch copper pot still, and the finished spirit is non-chill filtered.
The clear spirits are not aged, while VirGin is flavored with 14 botanicals.
The Single Malt Whisky and Rye Whisky (as mentioned) are distilled to about 155 proof, added to the cask at 124 proof, and then aged for 12 months in old bourbon barrels, with toasted fruitwood chips added to the spirit in the barrel to add flavor.
Wasmund also makes a Blue Top line (his normal bottlings are topped with crimson-colored wax), which are his Single Malt and Rye aged for 18 months in old Port barrels.
Over the years Wasmund has refined his recipe, trying different proportions of fruitwood in the smoking and aging process. He’s hit on a formula that works.
“It’s about balance,” he said.
The next step for the distillery, Wasmund said, is to get a larger still.
With more production, Wasmund will able to get his whiskies in front of more consumers, which means more people will be able to savor the taste of his fruitwood whisky. In the Single Malt, for example, you can’t help but taste (and enjoy) the flavor of apple.
“It’s not like any other whisky,” Wasmund said.