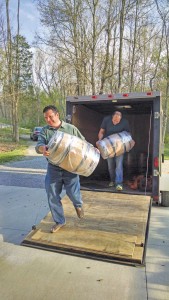 by Karen Binder
LOUISVILLE, KY — By 2018, an estimated 1,000 licensed craft distilleries will be in operation nationwide. That’s a crazy increase since 1990 when there were only seven.
“It’s really beautiful to see,” researcher Michael Kinstlick told about 1,200 people in late March at the American Distilling Institute’s 2015 Annual Conference and Vendor Expo’s opening session in Louisville, KY.  He’s also co-founder of Coppersea Distilling in New York.
“The growth is trending sharply up,” he said, “There seems to be a robust number of pre-entry producers waiting to enter the market.”
That market, by Kinstlick’s estimate, is currently capturing roughly 1 percent of market share. “What’s the upper limit? I don’t think there’s any ceiling in market share.”
This is not the only good news coming out the ADI conference. As ADI’s research economist, Kinstlick also has noted that 2014 was the first year that there are more distilleries than at the dawn of Prohibition.
There were 262 operating distilling in 2011, 588 in 2014 and 326 are expected to go operational in 2015.
Kinstlick also pointed out this sobering statistic: Distilling’s peak was in 1880 when the nation (population 50.2 million, which is roughly equal to today’s populations of Texas and Florida) was supporting roughly 8,000 distilleries nationwide.
What are today’s distillers making? Kinstlick’s research indicates whiskey and then vodka, which is followed by gin, other spirits and rum.
From all of these numbers, Kinstlick shared some optimistic conclusions for the industry:
• Distilled spirits consumption is solidly in “early-adopter” phase.
• Craft distillers have a 1 percent share of the domestic distilled spirits market share, while the more mature craft beer brewer industry currently has a 14 percent  of the U.S. beer market share.
• The renewal of American distilling is following a classic pattern of industry resurgences, most notably like craft beer.
And if attendance to ADI’s annual conference is another growth indicator, 769 licensed craft distilleries attended. Overall, more the 1,600 people were at the Louisville conference, showing a 50 percent increase over last year’s conference showing in Seattle. The conference also featured a record 141 vendor booths, 63 breakout sessions and 13 workshops.
“We’re part of an economic boom in America that’s unprecedented,” said ADI Director Bill Owens. “It’s exciting when I hear about this entrepreneurial spirit that has distilleries in a movie theater, fire house, poor house, buggy whip factory, pajama factory and even a Girl Scout camp. Distillers are entrepreneurs. They wake up and do it. They have that bug.”
The conference’s awards dinner also was a reflection of growth, judging by the number of awards announced in the annual ADI Craft Spirits Competition. Out of 457 entries, 188 medals were awarded, including 85 bronze, 66 silver, 28 gold and 9 double-gold medals.
The big winner of the competition was Heritage Distilling Company of Gig Harbor, WA, which picked up 11 medals ranging from 7 bronze, 4 silver and 3 gold medals to 5 Best of Categories. Other big winners earning 6 medals each were Huber’s Starlight Distillery in Starlight, Ind., and New Holland Brewing and Distilling of Holland, Mich.
ADI also honors pioneers and innovators in craft distilling with its distillery of the year award called the Bubble Cap Award. The 2015 winner was Todd Leopold, founding partner of Leopold Brothers in Denver, Co. ADI noted that Leopold “has achieved guru status within the distilling community for his knowledge, gentleness and generosity of spirit.”
“Our distilling team was very proud to be named Distillery of the Year,” Leopold stated to ADI. “We just marked our 15th anniversary as a company, and it was a nice way to cap off all those years of work.”
Visit www.distilling.com for more information.