Crafting into the cabin culture 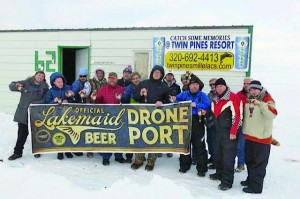 by Kelly Gates
In 2007, a group of brand savvy advertising professionals in Minneapolis put their heads together and came up with the concept for craft beer centered on the area’s concentrated cabin culture called “Lakemaid Beer.” According to Jack Supple, president of Lakemaid Beer, it all started with the invention of a freshwater version of the mermaid.
“We do quite a bit of work for clients in the fishing industry and we wondered why there weren’t any mythical freshwater mermaids,” Supple said. “So, we created a half woman, half walleye. Then a half woman, half large mouth bass and a half woman, half muskie and called them, ‘lakemaids.’”
After coming up with 12 mythical lakemaids — with one to represent each of the most common freshwater fish — the creative crew chose to concoct a craft beer that walked that fine line between the “more challenging craft beers and the less challenging domestics,” added Supple.
The group understood that it was not enough for Lakemaid Beer to have an appealing concept. The beer had to boast a flavor that was sessional and delicious and as a result, would bring the beverage buyers back time and again.
Supple and his team turned to August Schell, a local craft brewing company that helped formulate just the right recipe for Lakemaid.
“In the beginning, after solidifying the beer recipe, packaging and design, we distributed mostly in Minnesota and Wisconsin,” noted Supple. “Then, we spread to eight states and in 2010, we developed a winter Lakemaid lager for ice fishermen. When we began to exceed capacity at August Schell, we moved product to Stevens Point Brewery, enabling us to have enough summer and winter beer for all of our customers.”
As the brand expanded, so did its marketing outreach. The company’s staff focused on their core demographic, which included both fishermen and their friends and family. This group not only enjoys fishing, but also escaping to lakeside cabins throughout the summer.
A large part of this cabin culture involves the interaction and even comradery between friends and family members during fishing trips and weekend excursions “up north,” said Supple. So, as part of the initial Lakemaid Beer concept, the business’ founders came up with the idea of bottle cap bingo.
“We made drinking Lakemaid Beer an experience, with sayings on the inside of each bottle cap,” explained Supple. “One might say, ‘fish catches 11-pound steelhead’ or ‘fish catches 12-pound walleye.’ Or, you could get a bad one like, ‘line broke’ or worst of all, ‘net man blew it.’”
At the end of a long day’s fishing, Lakemaid drinkers can be found tossing a dollar or two into a kitty at a lakeside bar or back at the cabin, betting on who will uncap the best bottle top.
Other unique marketing concepts used by Lakeside Beer include flying over large lakes on opening day in May in planes dragging Lakeside Beer 45 ft. X 90 ft. banners across the sky.
The company has also invested in small, roadside boards along popular northbound migration routes with multiple signs placed in succession. One grouping of signs bore the words, “Way up north, near beaches, we share the fridge, with jumbo leeches, Lakemaid Beer.”
“It’s an inexpensive, fun way to market to our consumers and build our fan base,” said Supple. “These marketing messages become a fun part of the driving-up-north experience. We’ve had people tell us on Facebook that they pulled off just to buy Lakemaid Beer because they enjoyed the signs so much.”
One of the most elaborate promotional notions the company has come up with involves a small drone aircraft. According to Supple, because modern day ice fishermen locate their ice shanties or favorite fishing spots using GPS technology, using a drone to deliver Lakemaid Beer to specific coordinates — aka, to the front door of an ice house — was worth a try.
The company tested a smaller drone, which wasn’t able to lift and transport a full 15.9 oz. package of beer bottles. But, that didn’t matter. They simply removed several bottles and sent the miniature flying machine out over an iced-over lake anyway.
“We decided to do the drone delivery as a promotional piece, making a video that we posted on YouTube and our Facebook page and website,” said Supple. “We’ve had some issues with the FAA not approving drones for commercial use, so we aren’t currently able to use it to deliver to actual customers, but the technology is coming. Even the FAA has estimates on its web site regarding a certain number of commercially licensed drones that could be in operation in about a year or so.”
If Lakemaid Beer is ultimately awarded approval to deliver via drone, it would move forward with a larger model that can carry heavier loads. And the company’s customers would enjoy yet another layer to the already one-of-a-kind brand that is Lakemaid Beer.
“This would be such a great novelty experience when buying Lakemaid Beer,” said Supple. “People would definitely have fun surprising friends and guests with a beer delivered this way.”
For now, the brand will continue growing market-by-market, following the incidences of fishing license applications in each new state. And, with more than 33 million fishermen spending about $34 billion annually on trips, equipment, licenses and other items, Supple wants his company to, “be the ‘other items’” he added.