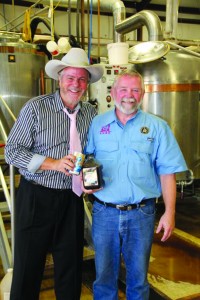 by Sally Colby
When Lee Hereford started Pedernales Brewing Company in Fredericksburg, Texas, he was already an experienced entrepreneur. He spent 21 years in the wine industry, and in 1983, was the founder of the 12th bonded winery in Texas. But Hereford was drawn to the appeal of creating memorable craft brews at his own brewery. “Back in 2009, it seemed like every time I opened the newspaper or listened to TV, there was a new craft brewery opening,” said Hereford. “I thought, craft beer is great, I love it and I want to be part of that.” Hereford wrote a prospectus, put together a team, produced some samples and went on the road. Part of his team included well-known consultant Dr. Paul Farnsworth. “He asked me what kind of beer I wanted to make,” said Hereford. “I told him I wanted to make beer that tastes like another one. I want to make beer that when people get to the bottom of the glass, they look at the bartender and ask for another.”
After much planning and two years spent raising the initial capital, Pedernales Brewing Company was launched in 2011. In April of 2012, the brewery shipped their first case of beer. Hereford’s plan from the start was to create traditional, Texas-style beers, so he worked with Farnsworth and brewmasters to create six core brands: Lobo Lito, Lobo Negro, Lobo Texas Lager, Pedernales Classic IPA, Pedernales Classic Hefe-Weizen and Robert Earl Keen Honey Pils. In addition, four seasonal beers are offered.
“We’re purists on the historical end,” he said. “The original recipe for our Texas lager dates back to 1910, and the Lobo Negro, a Bavarian black lager, dates back to 1950. Our IPA dates to 1947, and Lobo Lito is a throwback to the session beers made in England during WWII.” The Robert Earl Keen brand has been particularly successful. Named for Hereford’s singer-songwriter friend, the 1,500 cases produced in October 2014 were all presold. Despite ramping up production of that name, the brand is still selling out. “It’s amazing how many people know of him,” said Hereford. “They buy the first six pack because it says Robert Earl Keen, but they buy the second six pack because it’s really good beer.” Hereford describes the beer as an Austrian-style pilsner that includes some local honey and malt in the grain bill.
While some craft breweries work at continually wowing customers with edgy beers, Hereford focuses on building a loyal following. “I want people to drink Lobo wherever they are,” he said. “They could be at a four-star hotel and if Lobo is there, that’s what they’re going to drink. I want our beers to be good enough and consistent enough that someone can drink them anywhere.”
Pedernales Brewing Company offers brews in cans, bottles and kegs, all handled at the brewery. Hereford says the brewery is leaning toward canning versus bottling because bottles are not allowed at many venues. “Our beer was originally offered in longnecks, but we’re moving more into cans,” he said. “You can’t have glass poolside, lakeside or on the river, and there are a lot of festivals that are can-only. There are too many events that if you want to be involved, you have to offer cans.” Although Hereford insists on maintaining a reputation for consistent, quality brews, he plans to launch a line of extreme beers this year. The first will be a triple IPA, 10.5 to 11 percent ABV and 100+ IBU that Hereford calls a ‘palate thrasher’. “That’s something that the young crowd, ages 21 to 35 likes,” he said. “We’re already making tasty, traditional beers but the top one to three percent of the market doesn’t drink those beers. They’re drinking the weird beers, the sours, the Belgians and bourbon barrel aged. That’s what they’re looking for, so we want to make a few of those to get their attention. While our other beers are Rembrandts, we can make a Picasso when we want to.” That group of beers is yet to be named, but will be part of what Hereford calls the vault series. “They’ll be in 750 ml champagne bottles, vintage dated, signed and numbered,” he said. “We’re going to make 5,000 numbered bottles, and 50, 1/6 barrel slim kegs that will be allocated one per account. The big challenge is to find high alpha hops — they’re getting scarce because everyone is using them.”
Hereford says there’s a difference between wine and beer drinkers. “We’re getting a lot more of the 25 to 45 year old demographic who are experimenting with beer rather than with wine,” he said. “If you look at overall beer sales, they dwarf wine and distilled spirits sales put together. In the wine business, you get to turn the tanks once a year. In the beer business, if you’re making ale, you can turn your tanks every two or three weeks. If you’re making lagers, you can turn your tanks every four to six weeks.”
Pedernales brews were entered in the first Texas beer competition held last June in Lewisville. “We entered three beers,” said Hereford. “We won a bronze with the Lobo Negro, a silver with our IPA and a gold with the Hefe-Weizen.” Because Pedernales distributes beer in Mexico, they entered Cerveza Mexico, the largest craft beer competition in Latin America. There, Lobo Lito won a silver, Lobo Texas Lager won a gold, Lobo Negro won gold and Best of Class, and Pedernales Brewing Company was voted the best new craft beer distributed in Mexico in 2014.
“We’re having a blast,” said Hereford. “It all comes down to being very clear about what we wanted to accomplish. We came into this with a long-term plan. We had a clear vision of what we wanted to accomplish and what beers we were going to use to get there. We followed that plan, and it’s working.”