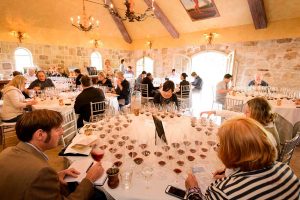 ST HELENA, CA — Crocker & Starr marked its 20-year anniversary in September. The estate winery, located in St. Helena, Napa Valley has become renowned for its award winning Sauvignon Blanc, its sommelier-favorite Cabernet Franc, and distinctive Napa-style Cabernet Sauvignon. Established in 1996 by San Francisco entrepreneur Charlie Crocker and former Spottswoode winemaker Pam Starr, the winery has spent the last two decades cultivating the land to bring it to its fullest potential, and blending distinct blocks to define their own characteristic style founded on the estate’s deep Napa Valley roots.
Though Crocker & Starr was founded 20 years ago, the estate has deep roots in Napa history which date back to 1875, when Irish-born James Dowdell first planted Zinfandel and Riesling there in the then budding wine region of St. Helena. Dowdell sold grapes from this property (situated on what is now Dowdell Lane) during some of Napa’s most precarious years as a wine region, and can be partly credited for helping to keep the region’s wine industry afloat during at least one of its early economic downturns. The property has since become legend for its singular terroir, characterized by alluvial soils that proved almost unmistakable in any wine produced from its grapes.
Today, Crocker & Starr handcrafts a small production of exquisite wines from select blocks within the 100-acre vineyard. Pam sees herself as a “soil-translator,” and her fidelity to the estate’s distinctive terroir has been evident in each wine she has made from the property. The vines are cultivated following organic principles, while the clusters are hand harvested and vinified through cutting edge winemaking techniques, blending the best of Old World philosophy and New World fruit. Between Charlie’s historic estate, that has grown grapes for over 140 years, and Pam’s winemaking expertise, vision, and business acumen, the partners have proved to be a spectacular match.
To celebrate this milestone, Crocker & Starr brought together select sommeliers, wine writers, and thought leaders in the industry for a tasting of the estate’s 20 consecutive vintages of Cabernet Franc and ‘Stone Place’ Cabernet Sauvignon to exhibit the progression of Pam Starr’s winemaking philosophy as well as the evolution of this exceptional estate. Moderated by Christie Dufault, Associate Professor of Wine and Beverage Studies at The Culinary Institute of America (and renowned sommelier), the vertical elicited an overwhelmingly positive response from attendees, who applauded their trajectory. Fred Swan, San Francisco-based wine writer, educator and authority on California wines and wineries, summarized, “The 17-wine verticals of both Cabernet Franc and Cabernet Sauvignon were remarkable. From beginning to end, each flight demonstrated Pam Starr’s gift for producing elegant, delicious wines which clearly reflect both the character and quality of Charlie Crocker’s vines and the unique signature of each vintage.” Christopher Sawyer, internationally renowned sommelier, wine educator and journalist, added, “As a sommelier and wine writer, I’ve always believed the true expression of Napa Valley shines in wine made with grapes grown at special sites and handled by winemakers who think like farmers. As proven at the 20-year anniversary tasting, the simpatico relationship between vineyard owner Charlie Crocker, gifted winemaker Pam Starr and the pristine Cabernet Franc, Cabernet Sauvignon and Merlot grapes grown on the historic estate near St. Helena make Crocker & Starr such an essential wine brand to follow for decades to come.”
The anniversary fortuitously coincides with the completion of the new Taylor Lombardo-designed Crocker & Starr winery building, marking 2016 as the first vintage to be 100 percent vinified on site. ‘Stone Place’ Cabernet Sauvignon is named for the original Dowdell stone architecture, which also forms the façade of the new winery. Pam and Charlie officially celebrated its opening at the estate’s annual invitation only ‘Carnivus’ harvest party, with over 300 wine club members and friends of the winery.
Of the winery’s milestone, Charlie Crocker said, “Pam and I have had a great 20 year partnership, but we are really excited about the future, including the potential of our new winery and the great wines we plan to produce.”